Song Of The Week: “Pepper” by Butthole Surfers

When the going gets weird, the weird turn pro.

Five minutes up the highway from the heart of downtown San Antonio sits a collection of red brick buildings known as Trinity University, a small but well-respected institute of higher learning founded almost 150 years ago. Many distinguished graduates have matriculated there over the years whom you surely wouldn’t know (the voice of Barney the dinosaur! the daughter of the guy who founded Wal-Mart!) without some sort of description. In fact, very few instantly recognizable names reside among the alumni — unless you follow politics (Sen. John Cornyn, Class of 1973) or Charlie’s Angels (Jaclyn Smith, Class of 1968) or this blog (me, Class of 1996). However, there exists one more notable exception.

Over the last 30 years, everyone enrolled at Trinity has been able to provide an answer about famous former students as a result of the most infamous moniker in rock. Sí, mi compadres, my alma mater must bear partial responsibility for producing Butthole Surfers. 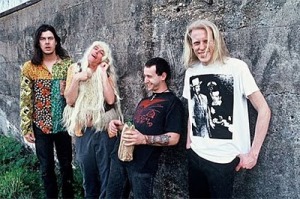 Anyone familiar with this bizarre group of gentlemen may be surprised to learn that frontman Gibby Haynes was the captain of Trinity’s basketball team, as well as the school’s “Accountant of the Year.” Guitarist — and fellow Tiger — Paul Leary shared common musical tastes with Haynes but stayed behind after graduation to work on his master’s degree. After attempting the straight and narrow, the two joined forces to form Butthole Surfers in the early 80s. They spent the better part of the next 10 years as a highly avant-garde—some might substitute the word “crappy” or “unlistenable”—noise-rock band influenced by Stockhausen, Texas psychedelia, punk, heavy metal, and their own darkly warped sense of humor.

Aside from a cult following, until the early 90s more people had heard of the band than had actually heard their music. That all changed for good in 1996 when the band released their second major-label album, Electriclarryland. One of the singles from that album, “Pepper” — I’m sure to everyone’s amazement, including the band’s — went to #1 on the Modern Rock chart. It’s a catchy slab of half-spoken psych-rock that worms its way into your brain, asks if it can lie down for a few minutes, and then stays for the next week and drinks all your liquor. It proved to be a critical and commercial peak.

For 99% of you, this is all the Butthole Surfers you will ever want. For the rest of you brave souls . . . a friendly warning — Here there be dragons. Vaya con Dios.