Song Of The Week: “Bad Seamstress Blues/Fallin’ Apart At The Seams” by Cinderella 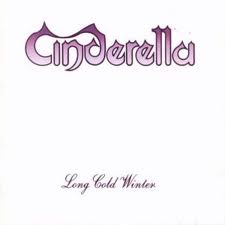 The late 80s/turn of the 90s were not a good time for me, musically speaking.

For some reason, nearly everyone decided to make the worst album of their career all at the same time (I’m looking at you ZZ Top, Stevie Wonder, Huey Lewis, The Cars, Hall & Oates, just to name a few…even Prince — it’s an open secret that anyone who dares whisper the word Batdance within 50 feet of Prince is dragged off and beaten with a raspberry beret…I wanna bust that body, ooh yeah, ooh yeah!). That’s a broad generalization, of course — Def Leppard, Neil Young, Madonna, and George Michael all released classics in this time period — though not too far from the truth as synthesizers took over instrumental duties but producers didn’t know how to make them sound good. It didn’t help that some artists just seemed to run out of quality songs.

Non-mainstream acts made some phenomenal albums at the turn of the decade, but as a kid I was pretty much limited to Top 40 radio and pre-120 Minutes MTV. Unless you had an older sibling or a really cool classmate, you probably weren’t listening to The Replacements or Husker Du, and it’s very possible your siblings and friends weren’t either, because one style of music totally dominated the airwaves at the time: that which has been labeled, fairly or not, hair metal.

I know they played other stuff on MTV and elsewhere, but much of the pop music from the time seemed by-the-numbers, and also, a worse offense by far, forgettable. (Yes, I know, I’m generalizing again, and many fine songs were sung, including The Escape Club’s Wild, Wild West; the unintentionally hilarious  “I ain’t no glamour boy– I’m fierce!”; anything by Fine Young Cannibals; and, of course, “miss her, kiss her, love her…that girl is poi-son.”)  Anyway, anybody with long hair, a little makeup, and a leather and spandex combo outfit fell under the hair metal umbrella, even if they were actually closer to a pop band (Poison) or a gussied-up rock band (Cinderella). I ignored almost everything and retreated into the past, discovering I preferred the music of my parents’ generation to my own.

Cinderella probably got more screwed over than anyone due to the hair metal label. In any other decade they would have been a gritty hard rock band in the vein of the Stones, or their contemporary, The Black Crowes. But the Crowes survived the great Grunge Purge of 1991/1992 while their pretty boy brethren did not. Image giveth, and

I appreciated the extinction of all these bands at the time, but in retrospect, I think grunge actually may have done more harm in the long run as most rock music became very earnest and humorless. The joy, the sex, the swagger, all these elements were wiped out in rock (along with the poofy hair and androgyny) only to resurface in rap (and, to some extent, in country).

It’s a shame, really, because at this point I’d rather have this one Cinderella song than all of Pearl Jam’s albums combined. My thanks go out to Dr. J for introducing me to Tom Keifer and company. Even though man cannot live on beer alone, I toast you from afar with an ice-cold Molson Golden.

4 thoughts on “Song Of The Week: “Bad Seamstress Blues/Fallin’ Apart At The Seams” by Cinderella”