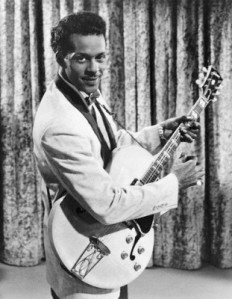 My guess is that most people off the top of their heads can only name one, maybe two, Chuck Berry songs (you can definitely name two if you own the soundtracks to Pulp Fiction and Back to The Future—“Chuck! Chuck, it’s Marvin. Your cousin, Marvin Berry! You know that new sound you been looking for? Well listen to this!”).  Or maybe you can’t name any at all, depending on how young you are, and that’s a cryin’ shame, because only Elvis influenced the next generation of music-makers as much as Berry did, and Presley had zero influence as an instrumentalist.  So give Chuck some love, y’all.

Chuck B. fathered the classic rock & roll guitar sound (he’s the archetype of the guitar hero) and his style was widely emulated in the 60s, his riffs recycled by countless bands in arenas and garages to this day.  The Beatles [1], The Rolling Stones[2], The Beach Boys[3] (to name only a few) would all have sounded vastly different—and may have achieved far less success—without Berry’s guitar playing.  While he was at it, he also wrote all of  his own songs and was one of the first to tailor his lyrics specifically for a teenage audience. Ted Nugent said, “If you don’t know every Chuck Berry lick, you can’t play rock guitar.”  Here’s the least you need to know:

The Definitive Collection  Probably all the Chuck Berry you’ll ever need.  He made his greatest impact over a short span of time so

what’s essential can easily be narrowed down to these 30 songs.  Like most artists, especially those of the 50s and early 60s, his best songs were his singles, so you don’t truly need any of his regular albums unless you decide to become a fanatic.  And if you do become a fanatic, you still won’t need individual albums because you’ll be wanting the three box sets which collect his entire recorded output for Chess Records. However, most people can do with a single-disc compilation like this one for a well-rounded picture, or maybe a two-disc set such as Gold if they want to explore the roots of rock a little more.  Check: “Roll Over Beethoven” & “School Day (Ring Ring Goes The Bell)”

[1] The Beatles covered more of Berry’s songs (15) than any other artist’s over the course of their career.
[2]The Stones’ first single was Berry’s “Come On” and for years they played “Little Queenie” & “Let It Rock” in concert.
[3]“Surfin’ U.S.A.” = “Sweet Little Sixteen”  Carl Wilson’s love for Berry made him pick up a guitar.

4 thoughts on “The Story: Chuck Berry”