What do you get when you combine rock & roll, the blues, English folk, the 70s, J.R.R. Tolkien, obscenely bulging trousers, Aleister Crowley, heroin, double-necked guitars, groupies, obscenely plunging necklines, violin bows, inconceivable amounts of alcohol, a golden-maned power vocalist, one of  the greatest drummers in rock, one of the greatest guitarists in rock, and a bass player?

You get Led Zeppelin, of course, the reason Classic Rock radio stations exist today and one of the originators of hard rock and heavy metal. Derided by music critics at the time and loved by the millions of teens who bought their records, Led Zeppelin swept over the world like a tidal wave. A tidal wave of ROCK! A force majeure on your turntable. (Read the fine print: your insurance policy won’t cover the hammer of the gods.) 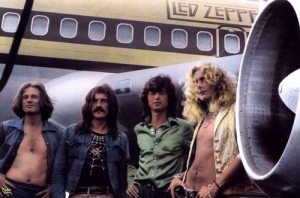 Zep’s offstage antics have become the stuff of legend, but I’ll leave it up to you whether or not you want to know more about their non-musical exploits. The stories make them severely cool by rock standards, but not necessarily by human being standards. Proceed with caution. Anyway, here’s the least you need to know:

Led Zeppelin II (1969)  Thunderous blues-rock. “Whole Lotta Love” will cause you to need coolin’—as well as schoolin’. Also, the beginning of their fantasy-themed lyrics (“In the darkest depths of Mordor . . .”). 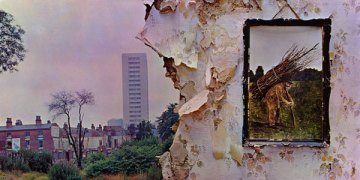 Led Zeppelin IV (1971)  A dark, complex, multi-layered, mythic masterpiece. If you don’t like this album, I’m afraid we’re going to have to revoke your backstage pass. Three words: Stairway. To. Heaven. (Even if you’ve heard it a thousand times. It’s “Stairway,” man!)

Houses Of The Holy (1973) Almost as strong as its predecessor, but it’s a lighter and more varied affair. “D’Yer Mak’er” showed a sense of humor and led to countless mispronunciations. Ultimately, nobody blended folk and metal better than Zeppelin.

Mothership  Led Zeppelin’s remaining albums range from merely good all the way to classic, but if you’re not looking to pick them all up then this 2-disc set is a decent way to hear most (though not all) of the highlights. No matter where you find it, however, you need “Kashmir.”

One thought on “The Story: Led Zeppelin”