Prepare yourself. A mind, once blown, cannot be unblown.

Take a look at the album cover to the left. That kid on the cover is 18 years old. He’s got the #1 album in the UK this week. So you might expect him to sound like Justin Bieber, or a Jonas brother, or One Direction without the other four guys. I mean, look at him! So brooding and mysterious and heart-throbby. Or maybe he’s a hip, young dubstep DJ like Skrillex (only with better hair).

But you expect wrong, dear reader. So very, very wrong. And so did I.

Who figures an 18-year-old kid will make a record that sounds like it’s 1965? On half the songs, Jake Bugg sounds like pre-psychedelic Donovan crossed with Phil Ochs. (Who the hell sounds like Phil Ochs?!) He’s also clearly listened to some early Dylan. Not quite as unusual, but the more uptempo tracks are dead ringers for Oasis demos. And all the songs sound like they were recorded in his garage on a 4-track tape machine (which may well be true). A little derivative? Yes. A lot awesome? Absolutely. 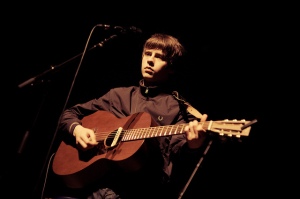 It’s fitting that Bugg’s album—his debut as it happens—knocked Mumford & Sons off the top of the charts. He’s very good, but without Mumford & Sons recently clearing the path for more folk-style artists, it’s possible this album doesn’t get made for another few years. Which may actually have been a good thing. Bugg’s lyrics are well beyond his age but his voice can’t always pull them off with authority. A few more years of life experience and he’ll completely nail these songs to the wall. On the other hand, I’m enjoying the hell out of his songs right now.

It’s impossible to predict the future of Jake Bugg based on one album. Dude may have shown us everything he’s got. He may trip on acid, join a cult, and give away all his royalties (he wouldn’t be the first artist to do this). But if he can develop his own sound while upping the production values a bit, the kid’s gonna be a monster. You’ve been warned.