The Story: The Beach Boys

Sun, sand, and surf. Hot dogs and hot rods. Hamburger stands, drive-ins, and Coca-Cola. The sound of summer in America. The sound of teenage innocence. Along with the Beach Blanket movies starring Frankie and Annette, The Beach Boys promoted the boss way of life in California better than anything since the discovery of gold in 1849. It’s not surprising the entire music industry shifted its focus to the left coast in the mid to late 60s.

Comprised of three brothers named Wilson, a cousin named Mike, and a few other guys (David, Al, Bruce) who came and went for varying lengths of time, The Beach Boys grew up harmonizing together around the family piano and then moved into the garage after picking up instruments. Their vocal blend is one of the most magical sounds in pop history, and it’s that sound which sustained them throughout their career, beginning with simple novelty songs about surfin’ and peaking with what eldest brother and resident genius Brian Wilson called “teenage symphonies to God.” 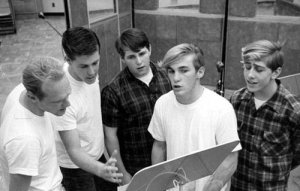 Coming of age in the California suburbs during the Eisenhower years, The Beach Boys almost couldn’t help being relentlessly square. I mean totally L7. It’s pretty easy to ignore in their early years but as the rest of their peers got groovy the boys struggled to be seen as hip. At times it’s painfully uncool, but it’s also endearingly weird and makes for some fascinating listening. (Oddly, just as they began to decline in the US in terms of both coolness and sales, they suddenly became very popular in the UK and remained so for the rest of the 60s and 70s.)

So break out the sex wax—hey now, it’s for surfboards—we can’t wait for June.  Here’s the least you need to know: 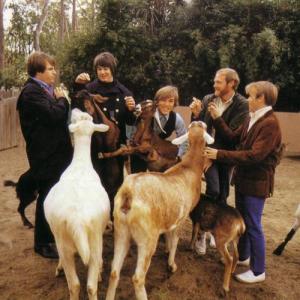 The Very Best Of The Beach Boys: Sounds Of Summer  The Beach Boys released 11 albums in their first four years of existence, so as you can imagine, there’s a lot of filler. Granted, much of it is entertaining filler but it’s really for surf music aficionados and hardcore harmony fans who would enjoy hearing The Beach Boys sing anything—the phone book, the US Tax Code, the owner’s manual for a 1948 Plymouth wagon. What you really need are the hits, and this compilation covers all of them on a single disc. To delve a little deeper there’s 50 Big Ones: Greatest Hits,  a double disc compilation which adds a few more 60s tracks and some of their stronger 70s material. Check: Fun, Fun, Fun & Don’t Worry Baby

Pet Sounds (1966)  The Beach Boys grow up. No more songs about girls and surfing, but rather a reflection on love and innocence—both won and lost—as the boys become young men. Check: God Only Knows & Don’t Talk (Put Your Head On My Shoulder)

The Smile Sessions/Smiley Smile (1967)  Oh, what a beautiful mess. These recordings for the unfinished SMILE album loom large in The Beach Boys’ legend. After working on these songs for months, Brian Wilson may or may not have had some kind of breakdown trying to top The Beatles and the album was shelved. It’s unclear how close to completion it was since Brian himself wasn’t sure. It certainly sounds like they could have released a 12 to 14 song version without much more effort but apparently Brian had something grander in mind. Bits and pieces were released on subsequent albums and bootlegs, and over the years people put their own compilations together. Brian Wilson put out his own version a few years ago, but without the vocals of the original Beach Boys ’tis but a shadow of what might have been. Anyway, most of the session tapes have now been officially released so you, too, can try to finish what The Beach Boys could not. Check: Surf’s Up & Heroes and Villains

Note: The first concert I ever attended was a Beach Boys concert in the late 80s. With John Stamos on drums. Uncle Jesse!

5 thoughts on “The Story: The Beach Boys”