Song Of The Week: “Feels So Good” by Chuck Mangione 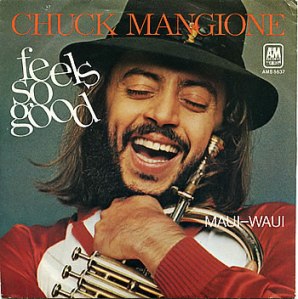 Instrumental jazz pops up on the Top 40 every once in a while—more frequently if your name is Kenny G—but not as often now as it used to back when radio programming wasn’t so rigid.

In the 70s, one branch of jazz got quite poppy and mainstream — it became known as ‘fusion’ due to its melding of jazz, pop, and rock, and it later spawned the genre of ‘smooth jazz.’ The general public loved it, while purists cringed and retreated to their Ornette Coleman records. Chuck Mangione ended up under the ‘smooth jazz’ umbrella, despite sharpening his chops for a few years as a horn player for Art Blakey’s Jazz Messengers, as fierce a group as ever played.

“Feels So Good” hit the Top 5 in 1978 (edited down from its 10 minute album version). There are many reasons to love it, and I’m going to break those down for you, list-style, south of the video:

1. This song could not sound more like the late 70s if you designed it with an Apple II and an Epson TX-80 beneath a poster of Farah Fawcett while wearing Star Wars pajamas.

2. Mangione’s soft and soothing tone does not come from a trumpet, but rather a flügelhorn. (Flügelhorn is a funny word.)

3. “Feels So Good” sounds like a lost TV theme — not quite dramatic enough for a cop or hospital show — maybe a dramedy set in a New England seaside town about plucky reporters at a small newspaper. You can just picture the actors turning towards the camera and smiling as their names appear on screen.

4. Grant Geissman plays a virtuoso guitar solo about halfway through the song that boggles the mind.

5. The flip side of the single is titled “Maui-Waui.” (Hep cats will know.)

6. Finally, anyone who watches “King Of the Hill” will know that someone among the writers or producers has a man-crush on Chuck Mangione. He’s appeared in animated form at least a dozen times and he’s been referenced a dozen more. “Feels So Good” shows up every season. Makes me love “King Of The Hill”–and Mangione–even more.

One thought on “Song Of The Week: “Feels So Good” by Chuck Mangione”