Song Of The Week: “Baby It’s You” by Smith 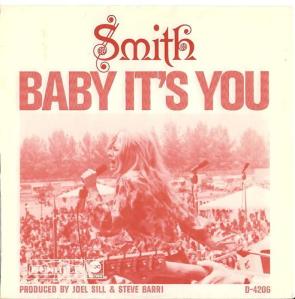 “Baby It’s You” first appeared as a single by The Shirelles in 1961, and was then covered by The Beatles two years later for their UK debut album. But the highest-charting version—selling over one million copies in 1969—came from a young rock band simply called Smith.

Smith was a cover band based in LA. In 1968, Del “Run-Run-Run-Run Runaway” Shannon discovered the group playing in a nightclub, became their manager, and promptly got them signed to ABC-Dunhill Records, home to Three Dog Night and The Mamas & Papas.

Taking the band into the studio, Shannon suggested covering “Baby It’s You”—a song they reputedly had never heard before—and worked out the funky arrangement for them, eliminating the backing vocals so prominent in previous versions and rocking the whole thing up.

(“Baby It’s You” was written by an odd trio. Burt Bacharach—who later went on to write such hits as “What’s New Pussycat?” and “Raindrops Keep Falling On My Head”—composed the music. The lyrics were cowritten (it took two people?) by Mack David—nominated for eight Best Song Oscars, including “Bibbidi-Bobbidi-Boo” from Cinderella—and by Luther Dixon—who had major success writing “16 Candles” and “Big Boss Man.” Despite having a hit together, the three did not reunite.) 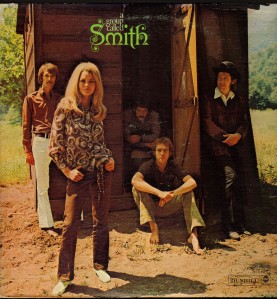 Luckily for Smith, they were surrounded by lots of talent during the recording sessions: along with Shannon at their side, the album was co-produced by Steve Barri—who had written and produced hits for The Grass Roots, The Turtles, and Johnny Rivers—and the horn arrangements came from Jimmie Haskell—who had recently won a Grammy for arranging “Ode To Billie Joe,” and would soon win another for “Bridge Over Troubled Water.” The band laid down a stone cold groove, lead singer Gayle McCormick belted out some blue-eyed soul, and it all added up to magic as the single climbed to #5 in the fall of 1969.

Smith subsequently had a couple of minor hits no one remembers and then broke up in 1971. Their only other claim to fame involved their appearance on the iconic soundtrack to Easy Rider. “The Weight”, as originally recorded by The Band for their 1968 debut album Music From Big Pink, was used in the film, but for some strange reason Capitol wouldn’t license the song for the soundtrack. ABC-Dunhill—who happened to be the company actually releasing the soundtrack—commissioned Smith, one of their own acts, to record a cover version. The album went gold, placing Smith on the turntables of hundreds of thousands of new listeners.