Song Of The Week: “Johnny Get Angry” by Joanie Sommers 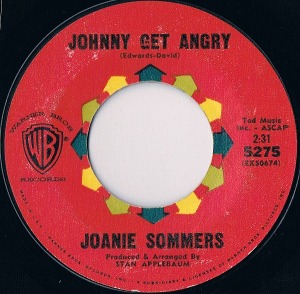 In the showbiz world of the 1960s, those people who were in charge of other people loved to maximize the exposure of their young stars by throwing them into as many mediums as possible. If you were a popular teen heart-throb on the silver screen, you would soon find yourself in a recording studio, even if you had an ear made of tin. Similarly, if you could sing, you’d also be cast in TV shows and movies and anything else they could find for you, on top of making albums.

One such starlet was Joanie Sommers, who began as a teen jazz singer before signing with Warner Brothers. The WB immediately set her up to record her debut single, and simultaneously cast her as “The Starlet” in an episode of 77 Sunset Strip, one of the hippest, most popular shows on the tube. 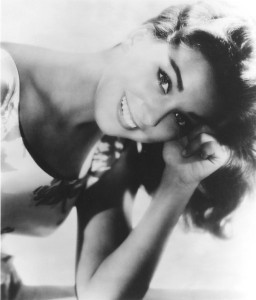 After small successes, such as co-starring in a movie with Mickey Rooney and being written up as a talent to watch by Billboard magazine, Sommers became well-known to the public as “The Pepsi Girl,” singing two of the company’s jingles in a series of very successful ad campaigns in the early 60s. Around this same time, she was given an odd song to record for her new album, a song which placed her in the pantheon of one-hit wonders.

In 1962, Sommers scored a Top 10 hit with “Johnny Get Angry,” a quirky production that almost seemed like a parody of teen music, and was completely uncharacteristic compared to her usual jazzy repertoire. The song’s unique arrangement of brushed drums, guitar accents on the offbeat, tinkling piano, and a chorus of enthusiastic kazoos during the bridge definitely set it apart from other radio fare at the time.

It’s not too surprising really considering the song was authored by Hal David (who went on to co-write some of the most successful and sophisticated adult pop of the 20th century with his partner, Burt Bacharach) and Sherman Edwards (who wrote the music and lyrics to the Broadway hit 1776 a few years later). This is where it all started for them: as hungry, hustling songwriters at New York’s pop factory, the Brill Building.

So don’t be a spineless milquetoast! Show Joanie that you care, really care, for her.

One thought on “Song Of The Week: “Johnny Get Angry” by Joanie Sommers”