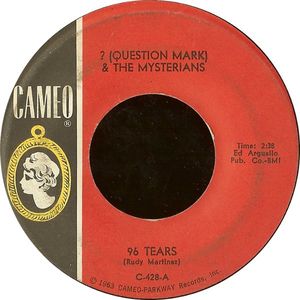 Long before Prince changed his name to a symbol, Rudy Martinez beat him to the punctuation.

Named after a Japanese sci-fi B-movie, The Mysterians formed in the early 60s when a group of Mexican-American teens in Michigan caught the rock & roll bug and began playing instrumental surf rock. When the British Invasion invaded the US a short time later, people began to ask why they didn’t have a singer. All the best bands had singers.

Enter ? (born Rudy Martinez), considered one of the coolest kids in town due to his groovy dancing and his inability to remove his sunglasses. Sounding not entirely unlike Mick Jagger sealed the deal. 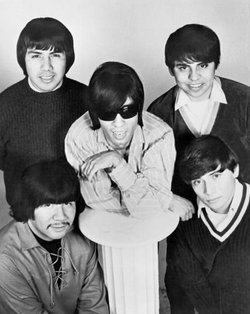 (Not sure if he adopted ? before or after he joined The Mysterians, but everybody refers to him as Question Mark. Even to this very day.)

Their new lead singer brought with him some lyrics he’d written called “Too Many Teardrops.” With an amendment to the name and the addition of a distinctive Vox Continental organ, a catchy garage rock tune with the mysterious title “96 Tears” came to life.

? & The Mysterians recorded the track in a living room converted to a studio, and then had 500 copies pressed to distribute and sell around town. They hand delivered copies to all the local record shops and DJs and then traveled to other cities around Michigan to do the same. They were afraid to go to Detroit, the big league, but when the song began to take off in these smaller markets, Detroit wanted the single, too, and when it exploded there, people took notice.

Dick Clark booked the group for an appearance on American Bandstand, the hottest music show of its day, and three weeks later, in the fall of 1966, “96 Tears” was the #1 song in the country. The guitarist and the organist for The Mysterians had only just started high school. The next couple of years would prove a whirlwind of crazy for all of the members, but they never reached those dizzying heights again.

Cry with me now.