Song Of The Week: “Silhouettes” by The Rays 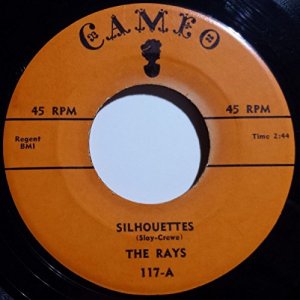 There aren’t too many songwriters employing O. Henry endings in their lyrics nowadays, but once upon a time, they loved a little twist in the tale.

One night, budding songwriter and nascent record label owner, Bob Crewe, took the train home and, while gazing out at the city, spotted two silhouettes embracing behind the drawn shade of an apartment window. Like any songsmith worth his salt, Crewe needed only the tiniest of sparks to set off the conflagration in his imagination. Upon meeting with his co-writer, Frank Slay, the two quickly whipped up a little R&B number and gave it to The Rays, a doo wop group with whom they had previously worked. They all hit the studio and the single was released on Crewe’s tiny XYZ label in Philadelphia.

As the story goes, a local DJ set up a stack of 45’s for airplay and proceeded to fall asleep as the singles dropped. “Silhouettes” was the last record. The tonearm hit the inner groove and moved back to the beginning — again and again and again. “Silhouettes” played until the DJ woke up. The request line began buzzing, and as the record gained steam in Philly, Cameo-Parkway picked it up for national distribution. The single hit #3 on the Billboard chart in 1957 and The Rays thereby entered the pantheon of one-hit wonders.

(Bob Crewe had slightly more success in subsequent years, cowriting five #1 singles, including “Big Girls Don’t Cry” (and every other hit by The Four Seasons), “My Eyes Adored You,” and “Lady Marmalade.”)

So look through the window with The Rays, but try not to jump to any conclusions (or you could be filled with confusions).