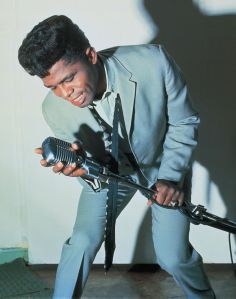 Give it up and turn it a loose for the Godfather of Soul, The First Man of Funk, Soul Brother #1, The Hardest Working Man In Showbusiness. Mr. Dynamite, himself. James Brown!

If you’re listening to music right now, chances are about 50-50 that James Brown majorly influenced the genre (unless you’re listening to Elizabethan madrigals, in which case I commend your wide-ranging tastes). Brown picked up many nicknames over his six decade career, but one of them should have been “The Architect,” because he designed blueprints for soul, R&B, rock ‘n’ roll, funk, and rap. His music holds the Guinness World Record for “Most Sampled.” And we haven’t even mentioned his influence as a live performer. 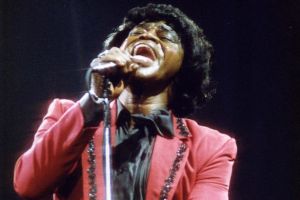 Let’s mention his influence as a live performer. Any singer who does more than just stand behind a microphone should thank James Brown every night after leaving the stage. His dancing, his acrobatics, and above all his sheer sense of showmanship led directly to Mick Jagger, Tina Turner, Michael Jackson, Prince, and even David Lee Roth. The man gave everything he had, every single night, to make it funky for you, commanding his tighter than tight band with every shake of his hips and grunt from his lips, his voice as much a percussion instrument as a singing instrument.

So get up! Get on up! Stay on the scene. Here’s the least you need to know:

20 All-Time Greatest Hits! / Gold / Star Time  James Brown’s discography contains roughly 20 kajillion albums, many of which follow the 50s formula of “some killer, some filler.” So the best way to go is a distillation — pure, uncut soul and funk. A single or double disc collection will give you a solid rush, but for a sustained journey with a greater perspective, the Star Time box set is indispensable.

Live At The Apollo (1963)  A night with James Brown & The Famous Flames. Places you right on stage with the band amid the non-stop screams from the audience. A legendary performance, and a classic set of raw, sweaty R&B.

From 1964. Driving the audience of teens in-sane: