Song Of The Week: “Paradise By The Dashboard Light” by Meat Loaf (feat. Ellen Foley)

When you think about the coolest names in rock history – Dylan, Bowie, Prince – you have to go a long, long way down that list to get to Loaf.

He was not born Meat Loaf, but rather, had Meat Loaf thrust upon him – by his high school football coach in Texas. In a bold move, he decided to keep the nickname, despite the aforementioned lack of coolness, and though he wasn’t always taken seriously at the beginning of his musical journey, when Meat Loaf released his debut album, 1977’s Bat Out Of Hell, which went on to sell, let me see, 43 million copies at last count, people began to view him in a different light. 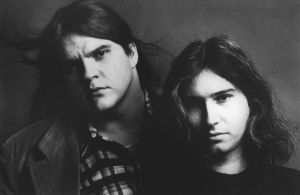 For most of the 70’s, Meat Loaf’s music career struggled to keep pace with his successful acting jobs, which featured appearances in the Broadway productions of Hair and The Rocky Horror Show. His biggest exposure came in 1975 when the latter was made into a movie and Meat Loaf became forever linked with the role of rock ‘n’ roll zombie biker, Eddie. All the while, however, he and his collaborator, Jim Steinman (whose sole experience lay in musical theater), worked on the songs for what would become Bat Out Of Hell.

Absolutely nobody thought this was a good idea. Everyone turned them down except a tiny label called Cleveland International, who had to convince their parent label, Epic Records, that this was not, in fact, the worst album ever created. Bat Out Of Hell did not fly off of record shelves like the simile which spawned its name, but rather, slowly and steadily gained power and popularity over the months and years.

“Paradise By The Dashboard Light” wasn’t the biggest hit on the album (the single barely managed to scrape its way into the Top 40 in 1978), but it has proven the most enduring. It also features quite a guest list: Todd Rundgren (who also produced the song) on guitar and backing vocals; Roy Bittan and Max Weinberg from Bruce Springsteen’s E Street Band on piano and drums, respectively; Edgar (come on and take a “Free Ride“) Winter on saxophone; Jim Steinman adds keyboards and “lascivious effects”; and, of course, Ellen Foley sings her heart out as Meat Loaf’s girl.

You may remember Ellen Foley from the 1980’s. After her solo career gained critical attention (but not sales) Foley turned her talents to acting. She is best known to TV geeks for her one season as a lawyer on the sitcom Night Court, and to Tom Cruise aficionados as a waitress in the movie Cocktail. Back on the music side of the story, fans of The Clash will know Ellen from her years of dating Mick Jones. He also produced and played guitar on her second album (which features all four members of The Clash as her backing band) and later wrote the hit song “Should I Stay Or Should I Go” about their relationship.

Foley eventually stepped out of the limelight, but her place in rock history is assured, singing face to face with Meat Loaf on a classic tale of teenage lust.

So here’s “Paradise By The Dashboard Light,” a 50’s-inspired rock opera in five and a half minutes (this is the shorter single version). Glowing like the metal on the edge of a knife…

Let’s bonus track this post with Ellen Foley’s biggest hit. “We Belong To The Night” didn’t do anything in the US or UK but reached #1 in the Netherlands in 1979.