Song Of The Week: “Every Rose Has Its Thorn” by Poison 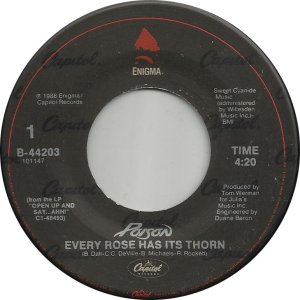 Poison originated in Pennsylvania in the early 80’s when two childhood friends decided to start a band. After a few years of playing mainly covers in small clubs and bars, the boys decided to risk it all and try their luck in Los Angeles, where the wildest of dreams can quickly come true — or slowly suck the life out of you day by day until you’re forced to buy a one-way ticket back home, a hollow husk of your former self. Welcome to the jungle, as Axl would later sing. Poison, despite having no connections and no money, worked their tails off night after night, displaying a fair flair for showmanship, and soon graduated to performing at the biggest rock clubs in town.

In 1986, the band signed with a local indie label and their debut album surprised everyone when it became a multi-platinum hit. On the back of this success, Poison was able to book tours with Ratt and Quiet Riot, two of the biggest pop-metal bands in the land.

Late one night after a show, lead singer Bret Michaels was strumming his acoustic guitar in a laundromat while washing his stage outfits (the band wasn’t big enough yet to have personal launderers) when he decided to go outside to a pay phone to call his special lady back in Los Angeles. After speaking to her for a few minutes he heard a male voice in the background, which might not have been a big deal in the afternoon, but it happened to be the middle of the night — not the best time to hear a dude’s voice at your special lady’s place. 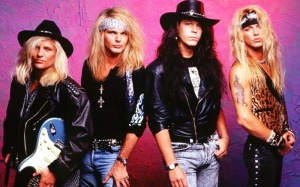 Michaels returned to the empty laundromat, picked up his guitar, and while his clothes went round and round, he poured his pain into song. The end result was a ballad titled “Every Rose Has Its Thorn.”

Despite the obvious hit potential, Poison’s record label was wary of releasing such a slow, sensitive, stripped-down song. They felt it would compromise the band’s image as good-time, party-boy rock ‘n’ rollers, a formula which worked to perfection on their first album. Why mess with success?

They needn’t have worried.

Released as a single in October of 1988, “Every Rose Has Its Thorn” topped the charts in the US and saturated radio, MTV, and school dances for years. The song helped Poison’s sophomore album, Open Up And Say … Ahh!, double the sales of their debut, and cemented glam metal as the most popular rock music of the time.

So set the spin cycle to gentle. You can try to separate the light from the dark, but every love will leave its mark. Here’s a cowboy singing his sad, sad song.