Song Of The Week: “Short Skirt/Long Jacket” by Cake 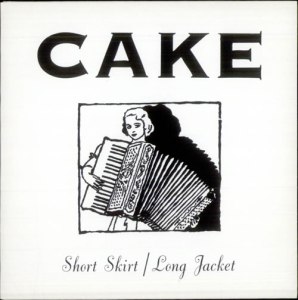 “You can’t please everyone,
so you’ve got to please yourself.”

Professional music critics are often wary of novelty, afraid they are being tricked into liking something they’re not supposed to, something which might sound kind of cool now but will lead to others making fun of them down the line. (Professional music critics are very protective of their cool.) And when Cake arrived on the scene in the mid-90’s with their deadpan vocals, Mariachi horns, rock guitar, and hip hop beats, reviews were decidedly mixed.

It didn’t help Cake’s reputation when their cover of Gloria Gaynor’s “I Will Survive” became a surprise alternative radio hit. To borrow a phrase from the British, it seemed like the band might be taking the piss.

The record-buying public also found themselves divided, unsure of what to make of all this genre-blending, and Cake fell into the category of being a band one either loved or hated — but, as Jacobean poet George Herbert once wrote, “Living platinum is the best revenge” (or something to that effect), and by the time they prepared to release their fourth album, 2001’s Comfort Eagle, Cake sat on a pile of platinum.

For the lead single, “Short Skirt/Long Jacket,” singer John McRea decided on an innovative approach for the video. He walked the streets with a film crew and recorded people (presumably people unfamiliar with Cake) critiquing the song as they heard it for the first time. Here’s a selection of the instant opinions:

“My daughter would like this at her wedding in October.”

“I don’t like all that thumping. It’s like it’s trying so hard to be important by being noisy.”

“I really don’t like these lyrics. They’re really awful.”

“What do they call that? You know, they have one hit? One-hit wonder.”

Released as a single in the summer of 2001, “Short Skirt/Long Jacket” proved a popular hit on modern rock radio and became a favorite choice for soundtracks and commercials. If one goes by the US Top 40, then technically, Gina — a senior art director in advertising — is correct with her above statement, Cake are a one-hit wonder. But if one includes the modern rock chart, the group has notched multiple Top 10 hits which can be heard on alternative rock stations every day of the week. Including “Short Skirt/Long Jacket.” (Take that, Gina!)

So trade in your current vehicle for a white Chrysler Le Baron. Tour the facilities and pick up the slack … with Cake.

I love this song. I have no problem posting multiple versions. Here’s the original video with everyone talking over the music: