Song Of The Week: “No Rain” by Blind Melon 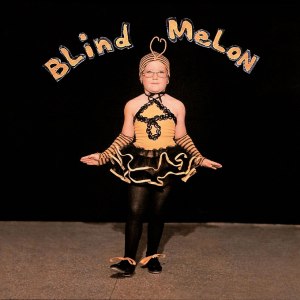 Never underestimate the power of iconography.

From Chuck Berry’s duck walk, to Pink Floyd’s album covers, to Madonna’s conical brassieres, rock and pop have always relied on the eyes as well as the ears to imprint the musical memories — the gift of sound and vision, as noted image-king David Bowie once phrased it.

In the case of Blind Melon, a 20 year-old picture of the drummer’s sister provided the unlikely spark that launched the band to the heights of fame and fortune, taking them from totally unsung to totally … sung.

Blind Melon formed in Los Angeles in 1990, when — as is often the case with LA bands — a group of transplanted musicians from across the US decided to join forces. They soon signed with Capitol Records, who must have had high hopes since they brought in legendary Neil Young producer David Briggs to helm the band’s initial recordings. For their debut full-length, however, Blind Melon traveled to Seattle (the hip and happening place to be in 1992) where they worked with the guy who had recently produced Pearl Jam’s multi-platinum first album.

One of the songs they recorded had been kicking around for years. Bassist Brad Smith wrote “No Rain” before Blind Melon even met, and he used to play it on his acoustic guitar while busking for spare change around Venice Beach. The full band arrangement turned the song into a catchy slice of Grateful Dead-inspired, neo-psychedelic, jangle rock.

Released as the band’s second single in the summer of 1993, “No Rain” initially went no-where … until they filmed a video based on the photograph used for the album cover. It was a picture of the drummer’s sister dressed as a bee for a school play in 1975, and deciding to bring her to life in a video proved an inspired choice.

Heather DeLoach, the very first actress to audition, became “Bee Girl” (as she will be known for the rest of her life) and danced her way into the hearts of millions. At one point, she was probably more famous than Blind Melon — you may not have remembered the name of the band when you heard “No Rain,” but you definitely knew “Bee Girl.” Everybody knew “Bee Girl.”

With their spirit animal joyously buzzing beside them, the band soon found themselves knee-deep in the honey as “No Rain” became a massive hit.

So don’t complain about the lack of moisture. Keep your cheeks dry today … with Blind Melon.