Song Of The Week: “Since I Don’t Have You” by The Skyliners

You know what’s good for a songwriter? Heartbreak. It’s surprisingly difficult to write a love song, but if someone stomps on your heart you can easily churn out 10 songs a day about your ruined life and the one who got away.

In 1958, Joe Rock was working as a promo man for a small record distributor in Pittsburgh. He fell in love with a secretary at a local radio station, but she soon ended the relationship to become a flight attendant in Oklahoma (Damn you, friendly skies!).

The day after the breakup, while driving to a rehearsal with an unsigned vocal group he managed called The Skyliners, Joe found inspiration in his devastation. Every time he stopped at a red light he wrote down another few lines, and by the time he walked into rehearsal he had the finished lyrics for a song titled “Since I Don’t Have You.”

Rock showed his work to The Skyliners who then composed a melody and vocal arrangement. Shortly afterwards, they entered a recording studio where lead singer Jimmy Beaumont poured his heart into the lead vocal, keeping his composure for the first few verses before slowly succumbing to the obsessive desperation at the heart of the song, repeating the word “you” over and over again until the final high notes signify there’s nowhere left to go, nothing more that can be said. 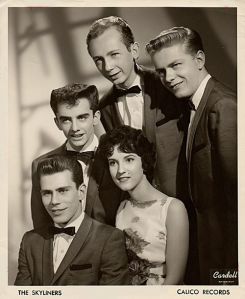 The Skyliners knew they had a hit, and hoped “Since I Don’t Have You” might score them a record deal and serve as their debut single. That did eventually prove to be the case, but a dozen labels rejected them first before a small local label called Calico signed them up.

Released as a single in December of 1958, “Since I Don’t Have You” slowly spread to radio stations across the East Coast and then shot up both the pop and R&B charts after the group appeared on American Bandstand, the hottest music show in the US. Joe Rock’s loss also turned out to be Joe Rock’s gain.

So don’t lose your hopes and dreams. Share your love … with The Skyliners.