Song Of The Week: “Walking On Sunshine” by Katrina And The Waves 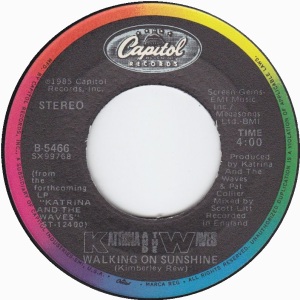 What do you get when you cross a waitress, a bowling ball hole-driller, a mailman, and a morgue attendant?

One of the most joyous and exuberant songs ever recorded, of course!

(Go ahead, try at it at home! Find four people with those occupations. Start a band. Make millions.)

Just north of London in the mid-70’s, Alex and Kimberley (you don’t meet a lot of dudes named Kimberley nowadays) formed a band called The Waves. After a couple of years together, Kimberley left to join Robyn Hitchcock and The Soft Boys, where his guitar playing helped to influence a generation of nascent alternative artists.

Meanwhile, about 30 miles away, American army brats Katrina and Vincent — teenagers looking for something to do — started a cover band called Mama’s Cookin’ and began playing gigs for soldiers at US military bases. It was mostly a lark, and Katrina had her bags packed and her ticket booked back to the States when fate intervened (cue dramatic music…dun-dun-DUN!) in the form of a phone call from Alex (you remember Alex…from the previous paragraph?) asking if she wanted to join forces. She did. And she brought Vincent along for the ride. 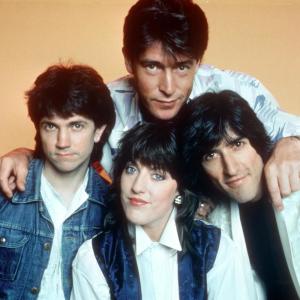 They continued as Mama’s Cookin’ for a couple of years, still playing covers, still playing to soldiers, when fate (you remember fate…from the previous paragraph?) came knocking once more. When The Soft Boys broke up in 1981, Kimberley decided to phone his old bandmate Alex to see if he wanted to revive The Waves. Alex did. But he suggested Katrina and Vincent come along for the ride. And so, Katrina And The Waves were born.

Unfortunately, nobody was interested in the band at all. Hence, they all had side jobs during the lean years: Katrina as a waitress, Vincent as a bowling ball hole-driller, Kimberley as a mail carrier, and Alex as a morgue attendant. In 1983, however, a tiny label in Canada finally signed the group, who then released a stripped-down pop-rock song called “Walking On Sunshine,” as well as two albums that created enough of a buzz to get Katrina And The Waves signed by Capitol Records.

In the spring of 1985, the band released a re-recorded version of “Walking On Sunshine” with a horn section and beefed up production and the song shot into the Top 10 all over the world, producing extra millions every year afterwards due to its frequent use in TV, movies, and advertisements. The group scored a couple of other hits — including winning the Eurovision song contest in 1997 — but this song is why they’re no longer working odd jobs on the side.

So let the clouds part and grab some ‘shine … with Katrina And The Waves.

2 thoughts on “Song Of The Week: “Walking On Sunshine” by Katrina And The Waves”