Song Of The Week: “Hypnotize” by The Notorious B.I.G.

It’s hard to believe that once upon a time it was almost as hazardous to be a rapper as it was to work on an Alaskan fishing trawler. The 90’s saw everyone packing heat and looking over their shoulder — like the Hatfields and the McCoys, but with automatic weapons.

In the 21st century we still have musical feuds, of course, but they take place mostly on Twitter and Instagram. Much less dangerous that way. Words may hurt, but not like a hail of bullets.

Christopher Wallace (aka Biggie Smalls, aka The Notorious B.I.G.) grew up in Brooklyn, NY where he excelled in school, winning several awards in English, a talent he put to use early on when he began rapping as a young teen. Unfortunately, he also started dealing drugs, a sideline he continued — even after multiple arrests and jail time — until his future collaborator and record label owner Sean (aka Puff Daddy, aka Puffy, aka P. Diddy) Combs finally convinced him to quit his life of crime and focus on his life of rhyme.

While East Coast rap reigned supreme during the 70’s and 80’s, by the mid-90’s the West Coast style dominated the charts, led by Dr. Dre’s G-Funk crew and a young firebrand named Tupac Shakur. What began as a friendly rivalry between East and West quickly devolved into a blood feud after Shakur survived a shooting and robbery outside of a studio where he was recording at the same time as Biggie and Puffy. The situation worsened after Shakur was murdered in a drive-by 2 years later. Despite no solid evidence, everyone assumed Biggie was responsible for all of this. 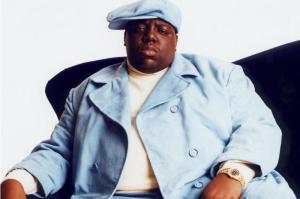 In 1996, during sessions for Biggie’s sophomore album, Puffy suggested building a track around a sample from Herb Alpert’s 1979 #1 hit, “Rise.” Biggie thought this was a great idea as the song was a childhood favorite, but there remained one significant obstacle — apparently the song was a favorite of lots of people, and the Alpert estate had already turned down a dozen rappers who wanted clearance to sample the track. Biggie and Puffy cut a rough mix anyway and decided to try their luck, sending a copy to Alpert’s son, who loved their take on his dad’s song and gave permission right away.

“Hypnotize” was released as a single on March 1, 1997. Nine days later, Biggie was shot and killed, apparently in retaliation for the Shakur assassination six months earlier, even though there existed little credible evidence he was involved at all. “Hypnotize” reached the top of the chart two months later, making The Notorious B.I.G. the fifth artist to score a posthumous #1 (pop quiz, music geeks: name the first four).

So heed the words of the OG Johnny Cash: “Don’t take your guns to town, boys.” Speak your piece, but keep the peace. Get hypnotized …. by The Notorious B.I.G.