Song Of The Week: “Low Rider” by War 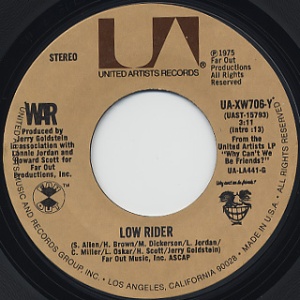 Write about what you know.

That’s fairly solid advice for any kind of writer, be it a novelist, a poet, or a lyricist. Everyone knows about love, and heartbreak, and the weather, of course, which is why those are extremely common topics for songs. But it’s the more esoteric knowledge, the obscure stuff, that will make your song stand out — like how to chop the springs down on a 1953 Dodge to make it ride 6 inches off the ground.

That’s not really a universal theme. But you know what is?

War spent the 1960’s gigging around Los Angeles before gaining worldwide attention as the backing band for Eric “Formerly of The Animals” Burdon. They immediately scored a massive hit with “Spill The Wine,” and recorded two albums with Burdon before he abruptly left in the middle of a European tour. War soldiered on without missing a beat, becoming one of the most popular bands of the early 1970’s.

In the studio to work on their fifth Burdon-less album, War began jamming on an instrumental when drummer Harold Brown accidentally turned the beat around, accenting the upbeat instead of the downbeat. Rather than halting, he continued to play (this was just a jam, after all — nothing was planned) while the other members adapted with grooves and riffs of their own. Out of nowhere, sax player and vocalist Charles Miller stepped to the mic and sang, “Low ri-der, drives a little slower.”

Brown and Miller certainly knew a thing or two about cars. Brown worked in an auto shop in his younger days and had made his own low riders. Miller had modded his car, too, and the pair used to cruise the streets around their home town of Long Beach.

Released as a single in 1975, “Low Rider” accelerated into the Top 10 in the US. Although War had previously scored bigger hits, “Low Rider” quickly became the group’s signature song, and has appeared in countless movies, TV shows, and commercials.

So get a little lower. And then a little higher. Take a little trip … with War.