Song Of The Week: “Last Nite” by The Strokes 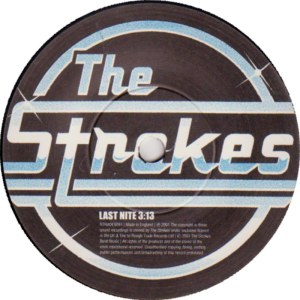 Rock & roll has its ups & downs. People have been proclaiming its death since about 1957, and though it sometimes falls out of favor, every few years a new artist emerges from the shadows only to find themselves dubbed the “saviour of rock & roll.” In 2001, The Strokes were so anointed.

At the dawn of the millennium, there was certainly no shortage of rock, but somewhere along the line the roll had disappeared. In America, rather earnest and heavy-handed bands like Staind, Nickelback, and 3 Doors Down ruled the alternative charts, and many music fans longed for an alternative to the alternative, someone who could produce classic 3-minute singles of melodic rock like they used to make them back in ye olden days.

The Strokes had known each other since they were kids growing up in Manhattan, and after a few years apart, regrouped to form a group. Their lineup was complete with the addition of guitarist Albert “My Dad Is Albert Hammond” Hammond, Jr. (Dad is most notable for writing – among many others – “The Air That I Breathe” by The Hollies, “To All The Girls I’ve Loved Before” by Willie Nelson and Julio Iglesias, and “Don’t Turn Around” by Ace Of Base). The band began recording demos and gigging around New York. They got real good real quick and a bidding war broke out among the labels, which RCA eventually won.

Into the studio went The Strokes to record their debut full-length album. Inspired by the timeless sound of the Velvet Underground, they opted for bare bones production, shooting for a record that was raw and polished at the same time (like when you wear makeup that looks like you’re not wearing makeup). Their stated intention was to sound the opposite of everything popular at the time — and they definitely didn’t sound like Nickelback, so mission accomplished.

Released in November of 2001 as the second single from their debut album Is This It, “Last Nite” was the band’s (admitted) riff on Tom Petty’s “American Girl.” The song proved to be their biggest hit ever on the US alternative chart and the album ushered in a wave of like-minded indie rock bands over the course of the decade. Rock & roll was back and ready to party.

So don’t feel so down. Turn around … with The Strokes.