Song Of The Week: “Can The Can” by Suzi Quatro 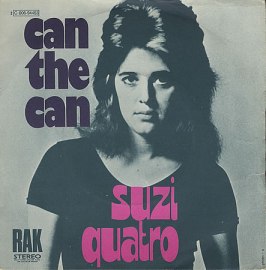 Best known in America as Leather Tuscadero on the show Happy Days, Suzi Quatro had already established herself as a tough, back to basics rock and roller in the UK with numerous #1 records. Virtually ignored as a singer in her native land—she originally hails from Detroit—she recorded a string of hits upon moving to England in 1971. She maintained her success there and all over the world throughout the rest of the decade, culminating in her biggest US hit, “Stumblin’ In” in 1978.

“Can The Can” was Suzi Quatro’s first hit in the UK, and her first #1 single. It was written by the songwriting team of Mike Chapman and Nicky Chinn—known together as “Chinnichap”—who developed a kind of bubblegum rock style and proceeded to write about a hundred Top 10 songs in England for Suzi, The Sweet, Mud, Smokie, and many others. (Americans have a better chance of recognizing them for Toni Basil’s “Mickey.”) Now, I don’t usually do extensive research on these songs when I write about them—preferring to draw upon my own knowledge reserves so I can pretend that all the years of reading and research haven’t produced a brain-load of useless information—but in this case I decided to see if there was anything behind the song. (By the way, “Useless Information” was a track on the debut album by The Move in 1968.) 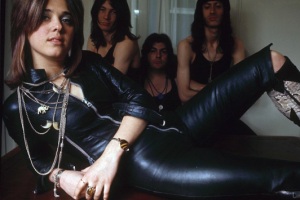 When asked what “Can The Can” means, Chinn replied: “It means something that is pretty impossible, you can’t get one can inside another if they are the same size, so we’re saying you can’t put your man in the can if he is out there and not willing to commit. The phrase sounded good and we didn’t mind if the public didn’t get the meaning of it.”

Of course. Clear as an unmuddied lake, sir. Can, man, another can. What’s not to get? So crank up the volume, kiddies. Cuz Suzi came to rock.

Suzi Quatro – Can The Can

Note: Above quote comes from 1000 UK #1 Hits by Jon Kutner and Spencer Leigh