Song Of The Week: “No Myth” by Michael Penn

Everyone knows Sean, and many know Chris, but fewer are familiar with the eldest sibling, Michael.

After struggling through most of the 80s with his on-the-verge-of-making-it band, Doll Congress, Michael Penn went solo and immediately scored an unexpected #13 hit with “No Myth,” the leadoff single from debut album, March. Amidst the hair metal and slick pop dominating the fall of 1989, the acoustic guitar rhythms and killer chorus of  “No Myth” stood in sharp relief. As did the rest of the album, which didn’t concern itself with contemporary production techniques and therefore doesn’t now carry the burden of being dated by its decade. In fact, all of his albums sound timeless (and wholly original) — unfortunately, each subsequent album sold fewer copies than its predecessor, despite each being equal in terms of quality songs. His record labels didn’t know how to market him, so they didn’t even bother to try. 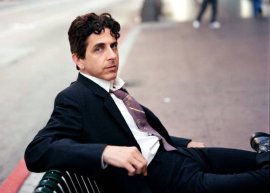 Penn seems to have become slightly disillusioned by the whole process as he’s spent most of the 21st century writing music scores for films and being married to fellow critically-acclaimed/commercially-challenged singer-songwriter Aimee Mann (you may remember her from the 80s and “Voices Carry” or her excellent soundtrack to Magnolia). [As an aside, I was lucky enough to catch Michael and Aimee on the last show of a mini-tour they did together in the summer of 2000. Their opening act was comedian Andy Kindler, best known for his many appearances on Everybody Loves Raymond. Now, I’ve seen comics tell a joke that didn’t go over well—everyone has—and they generally recover and move on. But I’ve never seen anyone bomb continuously for half an hour in front of 2000 people. No one laughed — not when he told the jokes, not when he tried to save himself. Even the crickets were silent. It’s one of the most brutal things I’ve ever seen. Michael and Aimee then proceeded to give one of the loosest, most fun-filled shows I’ve ever attended. Strange night.]

So here’s Romeo in black jeans. (In case you were looking for someone to dance with . . .)

2 thoughts on “Song Of The Week: “No Myth” by Michael Penn”