If it keeps on raining, levee’s going to break. That’s the situation here in Vermont. And then all these poor, defenseless albums will be swept away. Time to round ’em up.

The Olms – The Olms If you didn’t know otherwise, you’d think The Olms—comprised of veteran singer/songwriter Pete Yorn and illustrator/guitarist J.D. King—recorded this album in L.A. over a period of years spanning the mid-60s to the late-70s only to see their record label misplace the tapes and then rediscover them here in 2013.

Charli XCX – True Romance Electro-pop chanteuse Charli XCX has been releasing UK-only singles for a couple of years but she’s now breaking big in the US. You may be familiar with her work already — she wrote the omnipresent “I Love It” and gave it to Icona Pop, who turned it into a worldwide hit.

Charli counts The Spice Girls and Quentin Tarantino as two of her biggest influences. Hey, me, too!

Hanni El Khatib – Head In The Dirt I want that cover art as a tattoo. Or as a giant painting on the hood of my car.

The music it represents is some kind of wonderful, as well. Produced by The Black Keys’ own Dan Auerbach, the album at times brings to mind Jon Spencer or Jack White with the edges sanded off.

The perfect soundtrack for your incarceration. 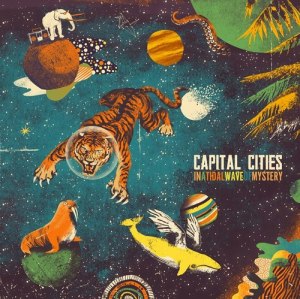 Capital Cities – In A Tidal Wave Of Mystery 21st-century disco with warmth and heart. The single “Safe And Sound” is currently hanging out just beyond the US Top 40. (But it’s already hit #1 in Germany — wo Disco für immer lebt!)

These former jingle writers are poised to take over the airwaves — of your booty.