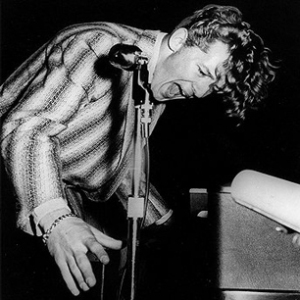 Before he recorded his first single, Jerry Lee had been married twice, arrested once, thrown out of bible college, and rejected by every record label in Nashville. All before the age of 21.

Lewis grew up as a piano prodigy in Louisiana. His dirt-poor parents mortgaged their house to buy his first upright, and he learned how to play gospel at church with a secondary education in boogie-woogie at a nearby juke joint.

Like Little Richard, he spent his life walking the line between the sacred and the profane. (Sometimes he took extended holidays from that line and had difficulty relocating it.) Unlike Little Richard, though, Jerry Lee seemed resigned to his fate, believing himself to be the devil’s own Pied Piper, leading his audience down the path to corruption. But rock & roll was the only way he knew how to live. And nobody could play the piano like Jerry Lee Lewis. 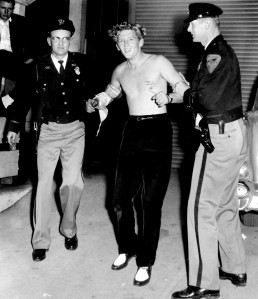 In late 1956, after selling eggs to make gas money, Jerry Lee took what was likely his last shot and went to Sun Studios in Memphis, the home of Elvis Presley and Johnny Cash. He got himself signed to the record label and proceeded to rise and fall in spectacular fashion. After 18 months and 5 hits — three of which entered the Top 10 — Lee found himself down and out, blacklisted from many radio stations and reduced to playing seedy dives.

But that’s what happens when you marry your cousin . . . and she’s 13 . . . and you’re not technically divorced from your previous wife. The press savaged him, but Jerry Lee was unapologetic — he was going to play the music he wanted to play, and live life on his own terms, and everyone else could go to hell. He’d meet them all there in due time. (In that era, marrying someone that young was neither illegal, nor unheard of, where he came from, and Jerry Lee and Myra remained married until 1970.)

It took Jerry Lee ten years to crawl his way back to the top. Reinventing himself as a pure country artist in the late 60s, Lewis’s first 11 singles in his new style hit the Top 10 on the Country Chart and he had dozens of hits throughout the 70s. He never stopped recording, and the ornery cuss is the last of the original rock & rollers still releasing new albums.

So come on over baby, we got chicken in the barn. Whose barn? What barn? My barn! Here’s the least you need to know: 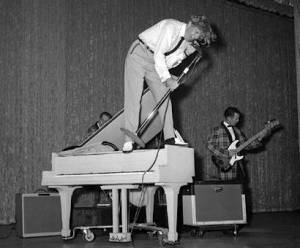 All The Singles ’56-’59 Jerry Lee Lewis continued making fiery, hard rock & roll in the 60s, but his biggest impact came with his Sun recordings. His first run of singles helped capture the excitement and recklessness of this new style of music, and Lewis was a wild man on the piano. These songs get licensed out to anyone who wants to reissue them, so there are 500 compilations, almost any of which will do. This one is chronological and comprehensive and it’s all you need for a bracing blast of old-school rock & roll. Check: Breathless & High School Confidential