Sometimes, recognizing a hit song is easy; but there are countless examples of record executives not having a clue. Here’s one:

Nino Tempo and April Stevens were a brother-sister act in L.A. during the early 60s. April had a couple of solo hits in the 50s, and Nino worked as an in-demand session musician, primarily playing with a group known as The Wrecking Crew and appearing on many of Phil Spector’s girl-group chart-toppers.

Signed as a duo by Atco Records, their first two singles flopped. Their producer, Ahmet Ertugen–who also owned the record label–took the siblings into the studio to lay down a couple of tracks he believed might have potential. With a few minutes of extra time at the end of the session, Nino and April decided to quickly run through two takes of an old standard from the 30s called “Deep Purple.” 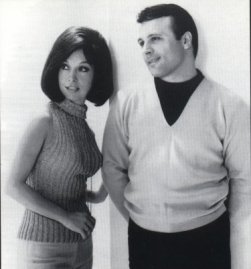 Previous versions of the song arranged it as a yearning, romantic ballad, but Nino and April turned it into a playful, boy-girl back and forth duet. The loose, spontaneous quality came about not only because they had to record it quickly (in only 15 minutes, and the musicians behind them didn’t even know how to play the song), but also because Nino forgot the lyrics at one point so April had to recite the words, which he then echoed.

Producer Ertegun thought “Deep Purple” was the most embarrassing thing the two had ever recorded, but Nino and April insisted it could be a hit, even in this rough state. In fact, they bet their careers on it, agreeing to be dropped from the label if the song wasn’t a success. Ertegun was highly doubtful, but he slapped it on the B-side of their next single (somehow expecting the A-side to be a hit with the title “I’ve Been Carrying A Torch For You So Long That I Burned A Great Big Hole In My Heart”). DJs were quick to flip the script, and “Deep Purple” went to # 1 in late 1963. Then it won a Grammy — for Best Rock & Roll Song!

To be fair, Ertugen generally knew what he was doing. After all, he signed Ray Charles, Aretha Franklin, and Led Zeppelin, along with founding one of the most successful independent record labels ever, and he wrote a number of hit songs himself. As Chuck Berry once sang, “It goes to show you never can tell.”

In case anyone wondered, the band known as Deep Purple is, in fact, named after this song (albeit the version from the 30s). It was the favorite song of guitarist Ritchie Blackmore’s grandmother.