Song Of The Week: “The Letter” by The Box Tops

In 1966, The Devilles took to the Memphis stages as one of the top young rock & roll bands in town, but a few failed singles and simmering internal strife led to a shakeup in the makeup. Additions and subtractions ensued, but if they didn’t want to lose their manager (and the equipment he had paid for) they needed a new lead singer immediately.

Enter Alex Chilton, a 15-year old kid someone recommended to the group after seeing him perform at a high school talent show. He proceeded to knock them out at the audition — so nobody minded too much about having to pick him up and drop him off at his house because he was too young to drive.

After a few months gigging around the city, the band’s manager deemed the new lineup ready to hit the recording studio. They were given a tape with three demo songs on it and told to learn one of them by the weekend. Having chosen a song about an aeroplane, titled “The Letter,” they finally got around to putting in some rehearsal time on Friday evening. Alex subsequently went out and partied well past the midnight hour and barely managed to grab some ZZZs before dragging himself into the studio the next day. It was his first time ever in a professional recording studio.

Having hardly learned the song the previous day, the guys ran through it a few times before recording the track live in just a handful of takes. And then they went home. They were small-time enough to have few expectations about “The Letter” and its possibilities. Simply getting airplay on a Memphis radio station would have been thrilling. (In fact, so tiny were the chances of anything happening that two of the members left the band before the single was even released, and Alex — who had already dropped out of high school once — briefly returned to the 10th grade before deciding to commit himself to music full-time.)

One thing the group had to settle on quickly was what to call themselves. They were done being The Devilles. Multiple stories circulate about how they chose their new name, but here’s the one I prefer: while sitting in the studio between takes, everybody throwing around suggestions and not getting anywhere, one of the guys said, “Well, let’s have a contest. Everyone can send in fifty cents and a box top.” Their producer immediately dubbed them The Box Tops. 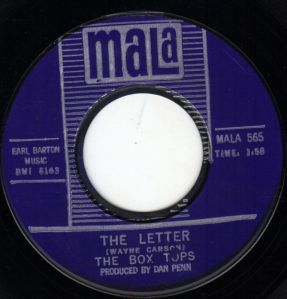 A fixture on the southern music scene, first-time producer Dan Penn had co-written such massive soul hits as “I’m Your Puppet” and “Dark End Of The Street,” but wanted more creative control in helping to shape a hit song from its inception. His chance arrived when handed this unknown group and their first attempt at a single. And Penn knew just what to do once they recorded the basic track.

After sweetening with strings and horns, he grabbed a sound effects record and overdubbed the roar of a jet plane taking off. His songwriting partner – who owned the studio and gave Penn the production job –  told him the sound was too literal and to get rid of it. Penn insisted it was his record to make and he was going to make it the way he wanted or destroy the whole tape. His commitment paid off.

“The Letter” blew up all over the south in the summer of 1967 and then spread out over the US, reaching the #1 spot in late September, where it stayed for four weeks and sold over a million copies. By January of 1968, two of the remaining original members had left the group, leaving Alex Chilton as the sole member of The Box Tops who actually appeared on their biggest hit. He sang with different iterations of the band for two more years with diminishing returns before finally calling it quits.

But the story doesn’t end there — stay tuned…

2 thoughts on “Song Of The Week: “The Letter” by The Box Tops”