Song Of The Week: “Last Stop: This Town” by eels 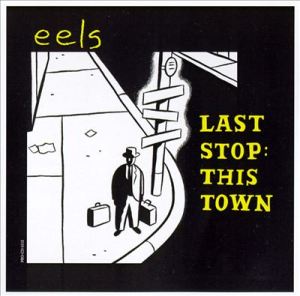 The ancient Greeks referred to such a soul-cleansing activity as a “catharsis” (a term most of us learned in english class at the same time as “hubris”). Let’s use it in a sentence: “The gods found it delightful to transform humans into wildebeests, or daffodils. Humans found it irritating, but achieved a kind of catharsis by writing about what jerks the gods could be.”

Mark Oliver Everett formed eels (yes, all lowercase) in the mid 90s after a couple of well-received albums under the extremely succinct moniker, E. The alternative music scene found itself in full flower at this time, and the public welcomed eels’ debut verily unto its bosom, making the first single a #1 hit on the US Modern Rock chart and a Top 10 hit in the UK. But, as Robert Frost once wrote, “Nothing gold can stay.” And it didn’t.

In the wake of eels’ success, Everett lost his mother to cancer and his sister to suicide. He also found himself coming to grips with being the only surviving member of his family, as his father had succumbed to a heart attack some years prior. This all sounds well and truly depressing, and it is, but Everett poured his pain into his music, like so many before him.

Turning tragedy into art, of course, dates back to the oldest cave paintings, drawn by early humans in France. When the proto-Gallic tribe finally decided after 6 months that Nog probably wasn’t coming back after running out to pick up the prehistoric version of a pack of smokes, they ameliorated their pain through pain-ting. (That’s actually where the word “painting” originates. Not many people know that.) In the same way, Everett’s second album under the name eels, Electro-Shock Blues, served as a remembrance, an examination, and a catharsis.

“Last Stop: This Town” addresses itself to Everett’s sister. Despite the dark subject matter, the lyrics are oblique enough that the single became a moderate hit in the UK, and the unique and whimsical video received quite a bit of airplay in the US. Everett tempers the sadness with flashes of humor and a bevy of pop hooks.

So let’s get down. Everybody knows, you play the blues so the blues don’t play you.

I don’t usually post videos since I find they can distract from the music when presenting a song people may not have heard before, but as I mention above, it’s unique and whimsical. How can I resist?