Song Of The Week: “Sister Christian” by Night Ranger 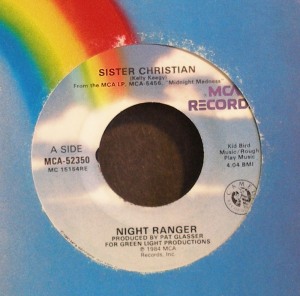 Welcome to the power ballad! Get your lighters ready.

This much-loved and much-maligned genre, which takes a slow song and adds dramatic electric guitars, originated in the 70s, but achieved maximum velocity in the 80s as every hard rockin’ band felt the need to show their softer side. Hence, the power ballad — strong enough for a man, but made for a woman.

Although not the inventors of the form, Night Ranger arguably kicked things into high gear. After “Sister Christian,” every hard rock band, from Def Leppard to Guns ‘n’ Roses, included a power ballad on their albums. And those songs inevitably became the biggest sellers as ladies fell in love with the bad boys.

Rising from the ashes of a funk-pop band in San Francisco in the early 80s, Night Ranger added a fiery guitarist and decided to take their music in an entirely different direction. Lead singer Jack Blades wrote most of the first batch of songs, but drummer Kelly Keagy brought “Sister Christian” to the table, a song about his younger sister who he felt was growing up too fast. Although ready in time for Night Ranger’s debut, the band was nervous about including the track — like most hard rock acts at the time, they wanted to maintain their masculine, all-about-the-partying image.

So, despite its obvious commercial appeal, the band saved “Sister Christian” for their second album, but only released it when the first single–a rockin’ little ditty in their usual style–failed to reach the Top 40. “Sister Christian” proceeded to storm up the charts in the summer of 1984, easily becoming Night Ranger’s biggest hit, and their signature song.

Now flick your Bics and raise them up high.