Song Of The Week: “Use Me” by Bill Withers

The usual path in the music biz involves singing, or forming a band, as a teen, maybe getting signed a few years later, scoring a hit after a couple of albums, and then, of course, holding on for dear life for as long as possible to stay in the game.

Bill Withers never did anything the usual way.

First of all, Withers hails from West Virginia (not exactly a hotbed of hitmaking), and when he turned 18, enlisted in the Navy and served for 9 years (not a lot of chart-toppers in them ships, either). He picked up the guitar during this time and, after leaving the service, Withers sold what he had and lit out for the bright lights, big city — Los Angeles. 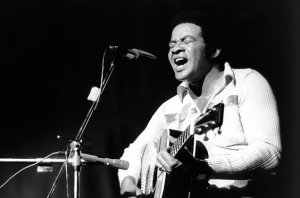 Withers worked for a number of aircraft companies as a mechanic, assembling parts, and in the evenings tried to get gigs around town. After a few years of playing the clubs and shopping a demo tape to anyone who would listen, the tiny Sussex label took a chance and signed Withers to a deal. Being a little older and a little wiser than most who sign their first recording contract, and knowing full well the vagaries of the biz, Withers didn’t give up his day job. In fact, the album cover for his debut shows him holding his lunchbox at the factory.

Bill’s first album was recorded quickly and with minimal production, but spawned a million-selling hit with “Ain’t No Sunshine,” which also went on to win a Grammy. So you’d think for his follow-up album they’d pour in the time and money and spruce things up a bit. Right?

After rehearsing in a garage, Withers and his small band recorded Still Bill in about 8 hours for $7500. One of the tracks evolved after the drummer found a groove and just kept playing it over and over until Withers had written the song. That’s certainly one way to write a #2 smash. When released in the late summer of 1972, “Use Me” became Bill’s third million-seller and only missed the top spot due to massive singles by Michael Jackson and Chuck Berry.

Withers continued to write hits for the next 10 years, but when the business, and the music, and the times changed, he took the unusual approach of walking away from it all. Not only walking away, but never mounting a comeback. Withers out.

What the heck. Let’s throw “Ain’t No Sunshine” on the flip side (in fact, it’s another example of a track that began life as a B-side when first released in 1971). It’s short, and it’s a classic R&B record. The best known part of the song is when Bill sings “I know, I know, I know” 26 times in a row. He originally planned to use that as a placeholder until he could write more lyrics but the producer and musicians on the session convinced him to leave it alone. Withers figured he was the factory worker and they were the pros, so he followed their advice.