Song Of The Week: “Army” by Ben Folds Five 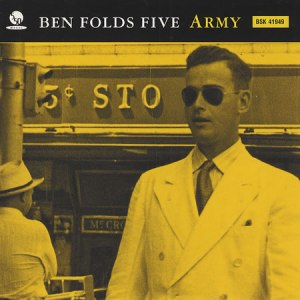 Many decades ago, during a pre-superstardom appearance on The Tonight Show, Steve Martin watched Johnny Carson whip out an impromptu impression of Goofy, the silly and lovable character from the Disney cartoons. When the cameras stopped rolling a few minutes later, Carson leaned over and whispered, “You’ll use everything you ever knew.”

He said this as one entertainer to another, meaning that Martin’s bag of tricks might eventually contain everything from an impression he once learned as a kid, to a silly dance he once saw, to the skill of making balloon animals, but the prophecy also holds true for writers–especially if they keep at it long enough–whether it’s comedy, songs, or blogs like this. You’ll pull material from your own life, from your family, your friends, your dentist, from that thing you watched on TV when you were 8 years old, from your high school physics class…

In fact, I’m doing it right now — the anecdote above comes from a book I read 10 years ago. Did my brainspace need to be cluttered by that tiny piece of info? Apparently it did. Anything at all provides fodder for laughs, or illustrating a point, or eliciting an emotion, or simply getting words down on a page. It’s all grist for the mill. (When’s the last time you heard that expression? That’s right – I turned the phrase “grist for the mill” into grist for the mill. Whoa. I just got metaphysical on you, baby!).

For the song “Army,” released in 1999, Ben Folds,  triggered by something his father said over a decade prior, took his experiences, wrote them down basically as they had happened, and then changed a few words to make it rhyme. Nothing oblique about this one. In a switch from the norm, I’m giving you the song first and how it came about second.

Here’s the story as Ben himself tells it on a live recording:

This one’s about my really horrible experience trying to get through college. And I got a scholarship, and then I lost a scholarship… after a semester … cause I flunked a class, because I flunked one test. The class was based on one test. The one I flunked. I flunked the test because I got delivered to the test in a police car at six o’clock in the morning with stitches in my nose and stitches in my mouth. And I was still drunk. And I had a broken hand, presumably because I had clocked that ass. I hit the wall.

So I threw my drum set, which is the instrument that I flunked on, into Lake Osceola in the middle of the University of Miami. And I took a Greyhound bus back home and I worked with a bunch of old ladies in a grocery store for about 18 months. It was at that time that I decided, in my bedroom I decided, while listening to Elvis Costello in 1986, that maybe I shouldn’t wait tables and do this old lady job anymore. Maybe … I should join the Army.

And, umm, for those of you who know the lyrics from the song, I derived them, except for the rhyming part which I set up myself, I derived it from the way it actually went down.

My father knocked on the door. I’ll just be dad for a second:
[Knock, knock, knock] “Benjamin, what are you doing in there?”
“Well, I was thinking about joining the army…”
“You’re fucking high.”

And there you go. Folds had some grist lying around, he milled it, and out came a song. Enlist in that!

5 thoughts on “Song Of The Week: “Army” by Ben Folds Five”