Song Of The Week: “99 Luftballons” by Nena

Oh, 80’s. There’s so much more to you than songs about working as a waitress in a cocktail bar and girls just wanting to have fun. You are large. You contain multitudes.

One kind of song in particular proliferated during the Pac Man decade, one which transcended all genres, appealing (and appalling) to punks, preppies, and neo-maxi zoom dweebies alike. I’m speaking, of course, about the “Threat of Global Thermonuclear War” song.

You could listen to synthesizers and learn about ICBM’s all from the comfort of your backyard bomb shelter. Don’t know what SDI or INF stand for? Never crouched under your desk in elementary school as part of a nuclear bomb drill? Then you were probably born after the Wall fell (the one in Berlin, not the one Pink Floyd sings about) and you never feared hellfire raining from the sky. Lucky you!

There are hundreds of these Cold War songs, but let’s take a look at the atomic explosion of “99 Luftballons.” 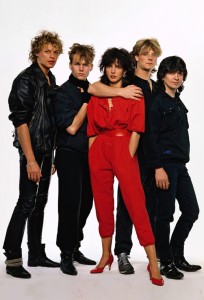 In 1982, the guitarist for German band Nena attended a concert in West Berlin by The Rolling Stones. At the end of the show, hundreds of helium-filled balloons were released into the night sky, forming strange shapes, like UFOs, as the they floated on the breeze. The young musician wondered what would happen if they should sail over the wall into Communist-controlled East Berlin. Would the Soviets freak out? Would tanks mobilize? Would they retaliate by sending thousands of their own balloons into the West?

He returned home and sketched out lyrics which imagined that very scenario. Only, in his mind, the event triggers a war lasting for 99 years, leading to mass devastation – a war started by a few simple children’s balloons. The song ends with the singer letting go of a solitary balloon and watching it fly away. That’s poignancy in action, yo.

Nena (which is the name of the lead singer and the whole band) recorded “99 Luftballons” in German, and it was this version that topped the charts in Europe in 1983 and peaked at #2 in the US in the early months of 1984. The band also released an English version, which they later disowned, but that’s the one that hit #1 in the UK and Canada.

Here’s the funkiest song ever about man’s inhumanity to man.

And here’s the English language version in case you want to know approximately what she’s singing in German. Side note: Nena has never once performed this song in English since recording it.