Song Of The Week: “Beep Beep” by The Playmates 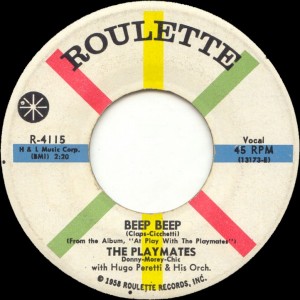 Ever since the first foot put pedal to metal, the melody-makers of the world immediately put pen to paper and wrote songs galore about the glorious automobile.

As the horse-drawn 1800’s were swallowed up in a cloud of engine exhaust, the first car songs began to appear on the home Victrolas. Initially, these were instrumentals emulating the noise and speed of the new-fangled automobiles, but soon people needed words to express properly their feelings of love for their vehicles (and so did advertisers), so 1905 produced the first vocal hit about the four-wheeled, gas-powered carriage, “In My Merry Oldsmobile.”

Car songs cruised along comfortably for the next few decades, but really picked up speed in the 1950’s, dovetailing perfectly with the rise of the US highway system, the advancements in car radio technology, and the new music sensation sweeping the nation. Rock ‘n’ roll and cars both symbolized freedom, sex, and power, so it’s no surprise that songs about automobiles spread like wildfire from coast to coast. And where popularity leads, comedy always follows. 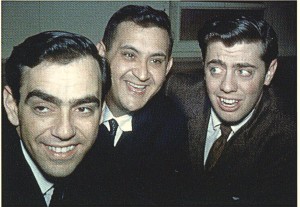 The Playmates (née The Nitwits) originally formed in the early 1950’s while attending the same college in Connecticut. They spent years performing and honing their clean-cut, collegiate vocal chops in the New England area until Roulette signed them in 1958. Right out of the gate they scored two moderate hits that bordered on parody, but went full-novelty with their smash single, “Beep Beep,” a song written by The Playmates about an encounter between a powerful Cadillac and a little Nash Rambler.

The song’s novelty stems primarily from a tooting car horn and the accelerating tempo which moves from tortoise to hare over the course of two and a half minutes. The record-buying public loved it, and sent the single into the Top 5 in December of 1958.

So fasten your seatbelts and hit the gas. It’s time to burn rubber with The Playmates.