Song Of The Week: “Wild Thing” by The Troggs 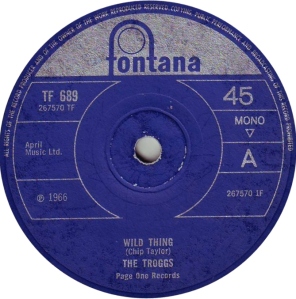 After unsuccessfully attempting to swing it as a pro golfer, Wes Voight turned to rock ‘n’ roll and instead became an unsuccessful singer in the late 50’s and early 60’s. He didn’t possess the strongest voice and still had a lot to learn about the craft of songwriting (at the time, he penned Buddy Holly and Everly Brothers knockoffs). But learn he did. Following a string of failed singles and a name change to Chip Taylor, he abandoned his stalled singing career and turned instead to writing full-time.

One day in 1965, a musical acquaintance phoned Taylor at his apartment in New York and asked him to pen a song for a local band he was producing called The Wild Ones. Taylor agreed, and almost immediately after hanging up had a chord progression and the chorus lyrics finished. He high-tailed it over to the studio and recorded a demo, stomping his foot, banging away at his acoustic guitar, and making up half the song as he went along. He didn’t take the track seriously at all, howling with laughter the whole time, and once he gave the recording to his friend the producer, thought little more about this slapdash tune called “Wild Thing.”

The Wild Ones duly recorded their version – which sounds like a bizarre attempt at a Dylanesque novelty song – and the single died immediately upon release in the fall of 1965. But the story… Doesn’t. End. There!

Somehow, Taylor’s demo for “Wild Thing” made its way across the Atlantic, ending up in the hands of Larry Page, a producer in the UK who needed a single for his new band, The Troggs, whose first single release had succeeded only in keeping the group completely unknown to the record-buying public. Knowing that an orchestra session he was recording would likely end early, Page brought The Troggs along to the studio, and as the classically trained musicians packed up their cases, the rock & rollers unpacked theirs and quickly set up their equipment.

The band had about 20 minutes to record “Wild Thing,” as well as the follow-up single. Both songs were recorded live, in just a couple of takes, with no going back to fix anything.

When released in the spring of 1966, “Wild Thing” tore up the charts both in the UK (#2) and the US (#1). It had been a productive 20 minutes in the studio. The other song The Troggs recorded that day, their third single, titled “With A Girl Like You,” topped the charts in the UK later that year.

As for Chip Taylor, he became a highly sought-after songwriter, authoring a number of hits, most notably, “Angel Of The Morning” (by Merrilee Rush, and later, Juice Newton). When not writing million-sellers, he spent his off hours as the youngest brother of actor Jon Voight, and as uncle to actress Angelina Jolie.

Prepare to get your sexy on, and let The Troggs make everything … groooovy.