Song Of The Week: “Summertime Blues” by Eddie Cochran

Summer isn’t all blue skies, beaches, and barbecues. Not if you live at home, don’t have your own car, and have to work for The Man in order to earn enough bread to take out your best girl.

To paraphrase Kermit the Frog, “It ain’t easy being teen.”

Eddie Cochran wrote and recorded “Summertime Blues” at the age of 19. He and his frequent collaborator, Jerry Capehart, decided to flip the ‘summer is glorious’ theme used by so many songs before and wrote instead about the hardships of summer. For one so young, Eddie knew quite a bit about working for a living.

The Cochran family packed up their bags and moved from Minnesota to the Los Angeles suburbs when Eddie was 14. Not knowing anyone, and with little else to do, he spent every waking moment with a guitar in his hands, and soon formed a country band with a couple of like-minded friends. They performed anywhere they could rustle up a gig and Cochran decided this was definitely the life for him. He dropped out of school at 16 to become a full-time, professional musician.

Eddie spent the next two years touring around California and occasionally recording a few tracks, but found little success until he switched to rock & roll and somehow got himself cast in The Girl Can’t Help It, alongside Little Richard and Gene Vincent, despite being almost completely unknown. His movie performance led to a record deal, which then led to a Top 20 hit in 1957 — but his next five singles flopped. It looked like Eddie might be in trouble.

Released as a single in the summer (appropriately) of 1958, kids flipped for the sound and sent “Summertime Blues” — originally a B-side — into the Top 10. The catchy guitar riff, the handclaps, the rebellious lyrics, all sent teens into a tizzy. Once again, however, Cochran’s follow-ups failed to hit in the US as the rock ‘n’ roll scene started to lose steam.

Over in the UK, it was a different story. Rock ‘n’ roll was actually gaining momentum as more and more kids bought up imported American records due to the less than authentic sound of what the British music labels were trying to pass off as rock. Eddie’s singles made the UK charts, and that’s how he found himself on tour in England in the spring of 1960. 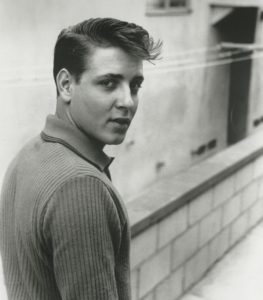 One night, on the way back to his hotel after a show, Eddie’s taxi lost control, skidded, and crashed into a lamppost. He hurled himself over his fiancée to protect her but was thrown from the car upon impact. The driver and the other three passengers, including rocker Gene Vincent, all survived, but Eddie died from his injuries the next day.

A posthumous single reached #1 in the UK a few months later and his music influenced countless rockers, especially in England, for decades to come. The Beatles, The Who, The Move, Blue Cheer, Led Zeppelin, T. Rex, The Sex Pistols, The Stray Cats and Van Halen (to name a few) have all covered his songs.

It’s summertime, but you don’t have to sing the blues. Raise a fuss and raise a holler … with Eddie Cochran.