Song Of The Week: “Insanely Jealous” by The Soft Boys

Robyn Hitchcock is a weird dude.

He writes songs about insects and skeletons and crustaceans. (Note the plural. Most people stop at one song about crustaceans. Not Robyn.)

His lyrics include words like “undulating” and “carapace” and “tumult.”

His love for surrealism threads its way through most of his work over the decades and leads to songs with titles like “(I Want To Be An) Anglepoise Lamp.” Do you know what an anglepoise lamp is? Well, I didn’t. Not until I heard this song 20 years ago and looked it up. Why exactly does he want to be an anglepoise lamp? No idea.

The Soft Boys germinated and consolidated in the mid to late 70’s in Cambridge, just north of London. Lead singer and songwriter Hitchcock drew inspiration from the weird pop concoctions of Syd Barrett, the absurd anti-songs of Captain Beefheart, and the death-inhabited storytelling of Fairport Convention. His bandmates brought a love of The Beach Boys and Steely Dan. They all grew up worshiping at the vinyl altar of The Beatles. 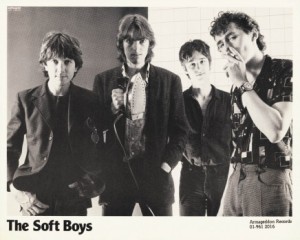 Arriving at the same time as punk, their first recordings sounded nothing like their influences. Rather, the band seemed to fight against themselves, against their natural inclinations, in an attempt to be avant-garde and anti-mainstream. Once they tempered their weirdness by embracing the poppier side of their souls, The Soft Boys reached a wider audience both critically and commercially with their 1980 neo-psychedelic masterpiece, Underwater Moonlight.

Then they broke up.

Their guitarist helped form Katrina and The Waves and found himself walking on sunshine a few years later. Robyn Hitchcock went solo and then grabbed a couple of former Soft Boys to anchor his new backing group, The Egyptians. Decades of critical acclaim and cult success followed.

The Soft Boys never had anything approaching a hit single, but their music, particularly the songs from Underwater Moonlight, influenced a host of bands in the 80’s, from R.E.M. to The Replacements to the psych-pop revivalists in the Paisley Underground scene.

So get zealous about the insanely jealous…Soft Boys.

One thought on “Song Of The Week: “Insanely Jealous” by The Soft Boys”