Song Of The Week: “You Ain’t Seen Nothing Yet” by Bachman-Turner Overdrive 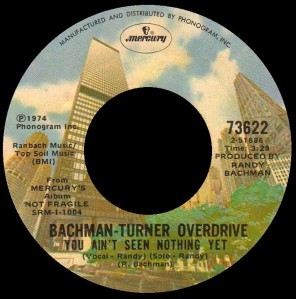 Throughout rock & roll history, stories abound of record executives being incredibly wrong when it comes to choosing a single. So credit should go to one who got it right, even fighting for the song when the artist disagreed.

And it happened with a song never meant to see the light of day.

In 1970, Randy Bachman left The Guess Who – a band he helped found in the early 60’s – despite the fact that the group had just scored a double #1 with”American Woman” and “No Sugar Tonight,” songs he had co-written which soon became cornerstones of classic rock. Bachman returned to his native Canada and started from scratch, forming a new group with a couple of his brothers and playing in small bars and clubs. After three years of struggle, personnel changes, and a rebranding, the band now known as Bachman-Turner Overdrive finally found success, and then shifted into a higher gear.

During sessions for their third album, BTO worked up an instrumental to play around with in the studio, something of a soundcheck to set microphone and amp levels before recording the proper tracks. Eventually, Bachman came up with a few lyrics and added a stuttering chorus as a joke to tease his sometimes-stuttering brother. He decided to record the song as a gift for his sibling and the band quickly laid down the track, not even bothering to tune up the guitars properly, and with Bachman making up words as he went along.

With the sessions nearly complete, the band’s representative from the label, Charlie Fach, came by the studio to hear the new album. He expressed enthusiasm, but in a classic display of record executive cliché, noted that he didn’t hear a single. Someone in the band mentioned “the work track” but Bachman was reluctant. After all, it was a joke song, haphazardly recorded, and never intended for anybody else’s ears. He finally agreed to play it and Fach flipped, predicting it would become the biggest hit of their career.

BTO attempted re-recording the track properly with everything in tune and without the stuttering, but failed to capture the magic of the original. So the joke song became the single. Released in 1974, “You Ain’t Seen Nothing Yet” went straight to #1 and did, indeed, become the biggest hit of Bachman-Turner Overdrive’s career, just as Charlie Fach predicted.

One thought on “Song Of The Week: “You Ain’t Seen Nothing Yet” by Bachman-Turner Overdrive”