Song Of The Week: “Love Is Strange” by Mickey & Sylvia

It isn’t often that a music teacher and his student team up to write a million-selling single right out of the gate, but that’s exactly what Mickey Baker and Sylvia Vanderpool did in 1956. Inspired by the success of Les Paul & Mary Ford, Mickey & Sylvia plugged in their guitars and hit the studio to sing a surprisingly suggestive song for the rather staid decade.

Result? #1 on the R&B chart. #11 on the Pop chart. It’s been covered (or sampled) by everyone from Paul McCartney to Pitbull, Sonny & Cher to Peaches & Herb.

But hey, what fun would this tiny tale be if there wasn’t a little controversy? Bo Diddley recorded the first version of the song a few months earlier than the duo and claimed to have written the lyrics (if not more). Mickey & Sylvia insisted otherwise. All three are credited although Diddley had to use his wife’s name for some weird publishing reason. As usual, the truth probably lies somewhere in the middle. 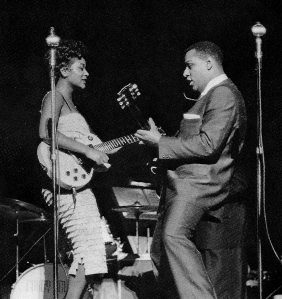 Mickey & Sylvia continued to perform and had some very minor hits over the next few years but ended their association in the mid-60s, never coming close to hitting the heights of their first collaboration. Mickey, frustrated with the music business, moved to France to play jazz for the next 40 years while Sylvia stayed in the game long enough to have a huge proto-disco hit with “Pillow Talk” in 1973. Her most lasting influence, however, arguably rests with her co-founding of Sugarhill Records, ground zero for the rap and hip-hop genres.

Alright. Enough preamble. Let’s get to the reason why at least half of us know this song. It’s certainly the first time I personally recall hearing it. Seems like only yesterday…

It was the summer of 1963 and I was vacationing in the Catskills with my family prior to heading off to college in the fall. Sparks flew between me and the dance instructor, Johnny, resident misunderstood bad boy with a heart of gold…

Wait a minute… That wasn’t me…. That’s the plot of Dirty Dancing!

PS Nobody puts Baby in a corner.

6 thoughts on “Song Of The Week: “Love Is Strange” by Mickey & Sylvia”