Song Of The Week: “I Put A Spell On You” by Screamin’ Jay Hawkins

Sometimes your inner self manifests as a delightfully deranged voodoo shaman.

(In which case, you should definitely set your inner self free.)

Jalacy Hawkins grew up in Ohio, where he studied classical piano and harbored hopes of becoming an opera singer. But Die Fledermaus doesn’t pay the bills, and Hawkins–after a successful stint as a boxer–soon found himself pounding out a more commercial sound on his keyboard, a sound more in line with the popular R&B emanating from jukeboxes in bars, diners and soda shops across the land.

In 1955, Hawkins recorded a slow, conventional blues ballad about his lady leaving him, and titled it “I Put A Spell On You.” His record label didn’t care for the track and shelved it. The following year, unhappy with his career trajectory, Hawkins jumped to the Okeh label–a decision which proved life changing–and reaped benefits almost immediately. 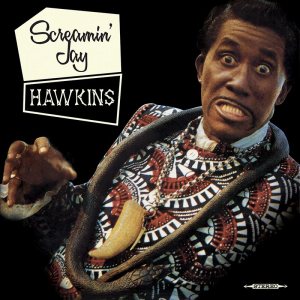 One of the first things Hawkins chose to do in his new digs was re-record “I Put A Spell On You.” It’s not known what exactly his producers intended for the track, but on the evening of the recording session they ordered up a mess of barbecue and enough liquor to paralyze a herd of elephants. The singer and his band proceeded to get thoroughly sauced before performing a decidedly crooked version of the formerly straightforward song.

Somewhere amid the growls and groans, Screamin’ Jay Hawkins was born.

(Unfortunately, Screamin’ Jay was so drunk he blacked out and couldn’t remember recording his most famous song.)

Released as a single in 1956, “I Put A Spell On You” never made the charts, but the song grew in popularity due to the over-the-top live shows Hawkins staged, emerging from a fog-shrouded coffin wrapped in a billowing cape and holding a scepter topped with a cigarette-smoking skull named Henry. Sometimes, rubber snakes were involved.

His influence spread over the years, from The Rolling Stones, to Alice Cooper, to Marilyn Manson. And though many have covered “I Put A Spell On You”–and covered it well–nobody done it like Screamin’ Jay Hawkins done it.