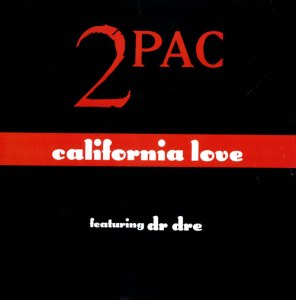 Not having done my due diligence on this, I can only guess that California boasts the greatest number of state-related songs. It’s likely Texas could stake a mighty secure claim without breaking a sweat. Everybody else is just whistlin’ Dixie.

Since Los Angeles became the capital of popular music beginning in the mid-60s (grabbing the crown from NYC), singers and songwriters both home-grown and home away from home have written love letters to the Golden State. From 1921’s “California Here I Come,” to songs by The Doors, The Eagles, Red Hot Chili Peppers, and Dr. Dre — all of them celebrating the lifestyle and mythology of living on the Left Coast.

Although born and raised in Harlem, Tupac Shakur moved to the Bay Area, just north of San Francisco, as a teenager. He soon found himself immersed in theater and poetry, and not too much later, rap. During the early 90s, he worked his way up from underground sensation to mainstream sensation, eventually working with the hottest producer in the game, Dr. Dre, on a track intended for Dre’s follow-up to his massive and influential album, The Chronic. That album never reached completion, and the track, “California Love,” ended up on Shakur’s final album before his murder in 1996. It would be his first, and only, #1 song.

For those who don’t recognize, that’s Dre on the first verse and 2pac raps on the second, about halfway through the track. We also have talkbox enthusiast Roger Troutman on processed vocals — he’ll show up again in the future for his own feature.