Song Of The Week: “Charity Ball” by Fanny 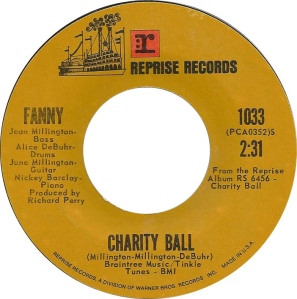 No one bats an eye at an all-female rock band nowadays. And more likely than not you’re familiar with those who broke through and made it possible not to bat an eye: The Runaways in the late 70’s, and The Go-Go’s and The Bangles in the 80’s. But even those bands stood on the shoulders of others.

Say hello to the shoulders of Fanny!

In the 1960’s, a couple of all-female bands were signed to major labels but these groups found themselves treated more as novelty acts, and, despite becoming popular on the touring circuit, only released a handful of unsuccessful singles. At this same time, teen sisters Jean and June Millington picked up electric guitars and began looking for other girls to rock with in their hometown of Sacramento, CA. Like any band at the time, they started small with local parties and school dances but soon found themselves driving to out-of-town gigs at larger venues and teen gatherings, even playing on the same bill with such established acts as The Youngbloods, The Turtles, and Creedence Clearwater Revival.

Fanny had a plan to become the first all-female band to make it big, and nowhere was bigger than Los Angeles, the bubbling hub of the music business. In 1969, the group packed up their gear and headed for one of the top clubs in the city, The Troubadour, which hosted an open-mic night for unknown acts. The club owner doubted a band made up of a bunch of girls could actually play, but grudgingly gave them time for two songs. Fanny proceeded to tear up the joint and had the audience yelling and stomping for more. The owner begged them to play an encore.

Luckily for Fanny, the secretary of up-and-coming producer Richard Perry attended the show that night and she convinced her boss to give the band an audition the next day. Fanny drove to the studio and set up their equipment, and when Perry breezed in he told them he had to leave in 15 minutes. He ended up staying for the next two hours, and immediately helped the band get signed to Reprise Records, at the time the musical home of both Hendrix and Sinatra.

Fanny spent the next five years constantly on the road, serving as the opening act for virtually every popular artist of the time, including Van Morrison, The Band, The Kinks, Humble Pie, Ike & Tina Turner, Chicago, B.B. King and countless others. They also recorded five albums and became the first all-female band to score a Top 40 hit, a rockin’ little number called “Charity Ball,” in 1971.

[I, too, tell you this on occasion, but I’m going to quote the liner notes from Fanny’s 1970 debut album: “For maximum fidelity, Fanny should be listened to at a high level.” So pump up the volume, everyone! It’s in the directions.]

Extra notes: Richard Perry had already produced the debut albums of Captain Beefheart and Tiny Tim (a huge hit) before working with Fanny. He went on to produce million-selling albums and singles for Barbra Streisand, Harry Nilsson, Diana Ross, Carly Simon, Ringo Starr, and Rod Stewart … to name a few.

5 thoughts on “Song Of The Week: “Charity Ball” by Fanny”