We looked at the title track from a movie last time we visited this decade — let’s take a cue from Steely Dan and go back, Jack, and do it again.

Dolly Parton grew up in a tiny town in Tennessee and knew right from the get go what she wanted to do with her life. The day after graduating from high school she packed her bags and her coat of many colors and moved to Nashville, the country capital of the world. After a number of failed singles under her own name, she finally found success with songwriting, penning two Top 10 country songs for other artists, and this helped bring her to the attention of popular singer and TV host, Porter Wagoner.

Parton and Wagoner’s duets immediately struck a chord and led to a string of Top 10 country hits, but much to Dolly’s disappointment (and Porter’s, too, since he served as her manager and producer) her solo career failed to ignite — until the 1970’s, that is, when she scored ten #1 hits on the country charts, and began crossing over into the pop charts, as well. By 1980, when she was cast in her first big screen acting role, she was an international superstar. 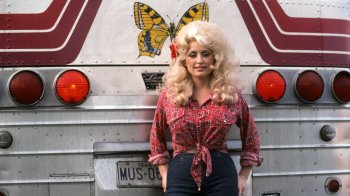 It seemed only fitting that Parton should record the title song for the female empowerment film 9 To 5, as she herself had worked hard to achieve success in the outrageously sexist, male-dominated music industry. People underestimated Dolly for years due to her bodacious blonde bouffant and ample curves (somewhat akin to Jessica Rabbit, who once wistfully stated, “I’m not bad, I’m just drawn that way.”) but she was a supremely gifted songwriter and image manipulator with sharp business instincts (as an example, Elvis Presley once contacted her about covering “I Will Always Love You” — an opportunity that would have most writers all shook up — with the caveat, standard for Presley, that Parton sign over half of the publishing rights to the song. She respectfully declined. That one decision has made her an estimated bajillion dollars over the next 40 years).

Released as a single in the fall of 1980, “9 To 5” achieved the rare feat of topping both the pop and country charts. The song’s infectious rhythms, propelled by a pounding piano riff and clacking typewriter effects (made by Dolly’s tapping fingernails), took the US by storm, and the lyrics proved inspirational to a generation of women who took its message about workplace inequality as an anthem to fight the proverbial (and literal) Man.

So pour yourself a cup of ambition, and get to work … with Dolly Parton.