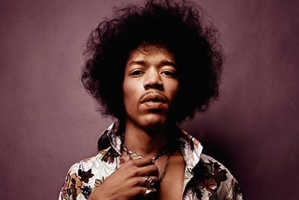 But you only need to know him by one name:  Jimi.

As a child, Hendrix wanted a guitar so badly that he carried around a broom for over a year as a substitute six-string until his father finally relented and bought him a cheap acoustic. He listened to records and practiced for hours every day, following in the fingerprints of blues masters both past and present, soaking up the licks and tricks until he could play them in his sleep (and he did sleep with his guitar beside him).

But Jimi knew he needed electricity. And when he got it, he would shock the world. 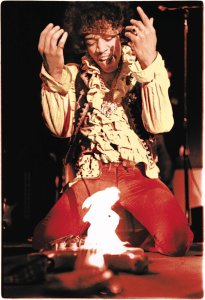 It took years of playing as a sideman to established stars such as The Isley Brothers and Little Richard before Hendrix could truly break free and let his freak flag fly. And it also necessitated a move to London, where the Swinging 60’s were in full flourish, and heavy rock had begun to make its weighty presence felt. Within a year, he had jammed with Eric Clapton, scored three Top 10 singles in the UK, and provided rock with one of its most iconic performances by burning his guitar alive at the Monterey Pop Festival.

Three years after that, Hendrix was dead, having bulldozed the musical landscape and erected skyscrapers into outer space.

So move over, Rover — and let Jimi take over. Here’s the least you need to know:

All 3 of his studio albums.

Are You Experienced  (1967)  The debut heard ’round the world. Distorted, raw, and revolutionary, with guitar sounds no one had dreamed of in heaven or Earth. A new philosophy, and a new sonic vocabulary. The roots of hard rock and metal grow here.

Axis: Bold As Love  (1967)  Freeing himself from the bonds of the blues to explore a quieter, more polished and pop-oriented sound with increasingly trippy, dream-like lyrics about butterflies and zebras and moonbeams.

Electric Ladyland  (1968)  Hendrix unleashed. The studio as workshop and playground. A double album of blues, pop, rock, psychedelia, sound collages, and everything else Jimi’s mind and fingers could conjure. Standing next to mountains, and chopping ’em down with the edge of his hand.