Song Of The Week: “How High The Moon” by Les Paul & Mary Ford 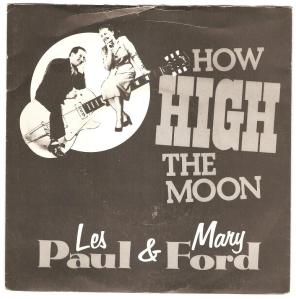 More of the roots of rock & roll . . . long story, this one. (I’m afraid it’s time to put your learning face on. Unlike the crowds in Gladiator, you will not be entertained. Unless multiple paragraphs of pure information get your blood racing. In which case, I’m about to rock the Colosseum.)

Most people nowadays are familiar with Les Paul because of the solid-body electric guitar he invented back in the 40s which bears his name (and later became synonymous with the Gibson guitar company). It’s hard to even picture Jimmy Page or Neil Young without a 50s model Les Paul in their hands.

Less well known to the general public is Paul’s trailblazing work with recording techniques — and that work had much farther-reaching consequences. In fact, the vast majority of pop and rock songs you listen to utilize the methods he pioneered.

Throughout the first half of the 20th century, the job of the recording engineer was to capture the best full-length, ensemble performance he could. Everything was live, and if the vocalist or anyone in the band made a mistake, it either showed up on the record or the song had to be taken from the beginning. Also, you couldn’t add or subtract anything. And, if you wanted the sound of eight violins, you required eight violinists. The technology of the time greatly limited what you could do.

This all changed in the late 1940s when the first reel-to-reel tape recorder was invented. Les Paul got his hands on the second one ever made and almost immediately invented the future of recording. 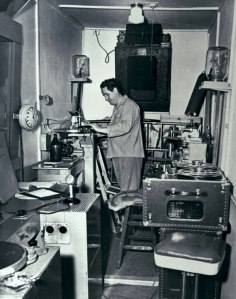 By making one modification, Paul enabled the machine to allow for overdubbing and multitracking. This meant he could record a sound, say a guitar track, and then layer another one on top of that. He had used this technique back in the 30s with direct-to-wax recordings, but he would sometimes go through 500 discs to make one record. Tape was cheaper, more efficient, and infinitely easier to manipulate and control.

A universe of possibilities now opened up. One person could record as many instruments as they wanted. If you made a mistake, you needed only to erase the offending passage, not the whole work. In addition, you could now add effects like echo to individual parts.

Les Paul used all of these techniques on his recordings and scored some minor hits in the late 40s when he teamed up with Mary Ford. But the duo exploded onto the worldwide stage in 1951 with the release of their second single.

“How High The Moon” was an old song, but Les Paul thought it could be a hit with the right arrangement. And he was absolutely correct. The song topped the charts for nine weeks. Nobody had heard sounds like this before.

In their tiny home studio, Les stacked 12 guitar parts and Mary stacked 12 vocal parts, harmonizing with herself. (Sometimes she had to sing with a blanket over her head so as not to wake their upstairs neighbor.) And they did it all with one reel-to-reel tape recorder, a small sound mixer, and a single microphone.

Also, they recorded the whole thing in less than an hour — in between Mary making dinner.

Les & Mary fell off the charts when rock & roll erupted, but a funny thing happened as time passed. When the rock royalty of the 60s started talking about what records they loved as children, “How High The Moon” started getting mentioned — it was the first song The Beatles ever played live, and Keith Richards and Jeff Beck both cite it as a reason they fell in love with the guitar.

Not too bad for an hour’s work.

And here’s a bonus track to show why Les Paul is arguably the first guitar hero: