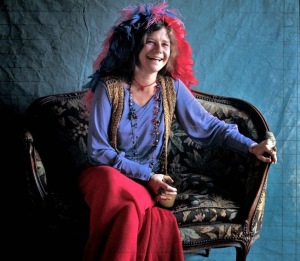 Little girl blue.  She could belt it out, but she just couldn’t take it.

Meet Janis Joplin — one of the pioneering women of rock & roll, with a voice to reach down into your very soul.

Now, women didn’t exactly rock in the early to mid 60s. You could find lots of ladies in folk, like Judy Collins; or in pop, like Nancy Sinatra; or in R&B, like Etta James.  But the only woman singing in a bona-fide rock band was Grace Slick of the Great Society, and soon after, in Jefferson Airplane. She wasn’t alone for long. 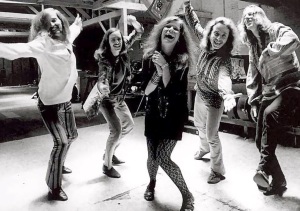 Janis Joplin was sweatin’ her boots off playing clubs and bars in Texas when an old friend of hers who now managed a band in San Francisco invited her to come out and audition for them.  She soon found herself part of Big Brother & The Holding Company, a powerful rock band just beginning to make waves in the Bay Area, an area soon to be known as the epicenter of psychedelic rock, “The Next Big Thing” on the music scene. Janis went full hippie, trading in her Texas togs for Haight-Ashbury chic. 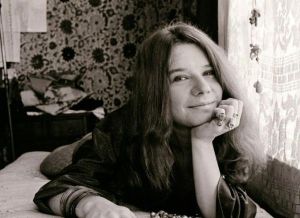 After two albums and an electrifying performance at the Monterey Pop Festival in the summer of 1967, Janis decided to strike out on her own, take the reins and see if she could ride this bucking bronco herself, break it and take it wherever she wanted to go.  She did just that, but eventually the booze and drugs caught up with her, as they did with many at the time, and she died of a heroin overdose at the age of 27.  She hadn’t even completed her fourth album yet.

As friend and fellow singer Nick Gravenites said, “She lived and died a blues life.”  And that was Janis — married to the blues, for better and for worse. 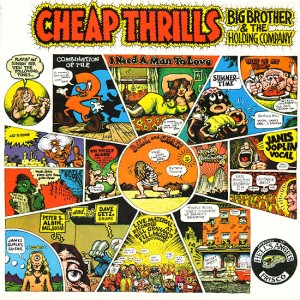 Cheap Thrills  (1968) with Big Brother & The Holding Company  Originally titled Sex, Dope, and Cheap Thrills but truncated when their record label balked. This is Janis finding her voice, understanding what to do with it, and driving it into your heart.

Pearl  (1971)   The swan song.  An album full of relaxed confidence. Janis showing off everything she could do, from country soul, to blues, to rock, and promising more.  A promise ultimately unfulfilled.