Song Of The Week: “Naked Eye” by Luscious Jackson 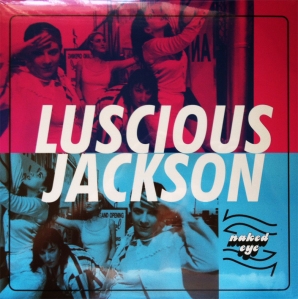 Sometimes I got nothin’.

Here’s what I know about Luscious Jackson: They’re from New York. They named themselves after a basketball player from the 1970s. They were the first band signed to Grand Royal, a label started by The Beastie Boys.

And if there’s a story behind “Naked Eye” then it’s very difficult to locate inside the internet’s infinite maze. But I’ve always really liked the song, so I’m just going to write a bunch of words to fill up the space on this post, as if it’s a high school English paper with a 1500 word minimum about a book I didn’t read. If I could enlarge the margins and double space the lines, I would. I would set forth in digital ink, upon this blank electronic page, the verbiage necessary to inform and illuminate upon the topic herein and aforementioned in order to convey the maximum impact with dexterity and alacrity the awesomosity of the music about which, you will soon hear, fulfills the expectations of the sentences so written.

What else, what else …

The video features noted “Hey, it’s that guy!” character actor Max Perlich, whom you may recognize from many things, including a brief cameo in Ferris Bueller’s Day Off and a turn as a gunslinger in Maverick, as well as appearances on Buffy the Vampire Slayer, Gilmore Girls, and Justified.