Song Of The Week: “Sea Of Tears” by The GoldeBriars

By Houston Roby February 20, 2018 60s Curt Boettcher The GoldeBriars The Mamas & The Papas

Welcome to the wonderful world of Sunshine Pop! It’s a warm and groovy place to hang out, with sweet vocals and soft sounds, and one of its architects, Curt Boettcher, began his career right here, as leader of the folk group, The GoldeBriars.

The GoldeBriars came to life in Minnesota in 1963, one of hundreds of groups hoping to be the next Kingston Trio, or Peter, Paul & Mary. Their vocals didn’t have the same depth of character and emotion as PP&M, but their harmonies and vocal arrangements sounded like no one else, and they quickly received an offer from Columbia Records, home to the biggest names in folk.

Unfortunately, Columbia released the quartet’s debut album in February of 1964, coinciding with the arrival of The Beatles onto US shores – and onto radios, turntables, televisions, pop charts, lunchboxes, and bedroom walls. This polite album by an unknown folk group sank immediately under a wave of “Yeah, yeah, yeahs.”

A few months later, The GoldeBriars returned to the studio to record their follow-up, this time with a wider variety of instruments outside of the group’s usual acoustic guitar and banjo. The songs, however, still sat squarely in the quickly going out of fashion folk milieu. With one exception. 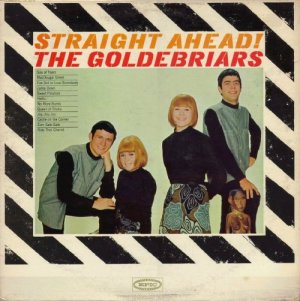 “Sea Of Tears,” co-written by Curt Boettcher, with its fuzzy bass lick, bouncing harpsichord, and distinctly non-folky vocal arrangement, sounded like nothing else in the group’s catalog. In fact, it sounded like nothing else in any group’s catalog because what it sounds like is the sunshine pop of 1967 and beyond – as performed by such acts as Harper’s Bizarre and The Free Design – but three years ahead of schedule.

Only released as a single in the UK, “Sea Of Tears” sold about a dozen copies. None of The GoldeBriars’ other singles ever hit the charts in any country and they disbanded in 1965, still unknown to most of the general public, but highly influential for another reason. The group performed regularly on the folk circuit in 1964, spending a great deal of time singing on stage with The Mugwumps and The Journeymen. Unfamiliar with those names? Well, members of those groups soon banded together to form The Mamas & The Papas, whose harmonies and vocal arrangements sounded suspiciously similar to those sung by The GoldeBriars.

The year after the breakup of his group, Curt Boettcher produced The Association’s debut and their first few hits, before forming cultish, but influential, sunshine pop and baroque pop bands, The Millennium and Sagittarius.

So grab your handkerchief, hoist up the mainsail, and set a course for the sunshine, with The GoldeBriars.

2 thoughts on “Song Of The Week: “Sea Of Tears” by The GoldeBriars”