Song Of The Week: “Africa” by Toto 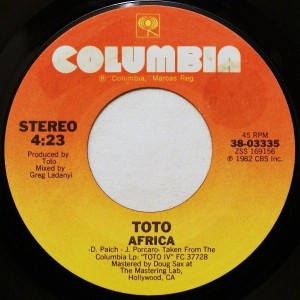 Quick! Aside from “Africa,” name all the other Top 20 songs that contain a continent in their title.

Trick question! There are no others.

Way back in the early 1980’s, songwriter David Paich started messing around with a new synthesizer when he stumbled onto a pattern he liked. Ten minutes later he had the whole melody mapped out, and a few minutes after that the complete lyrics to the chorus poured forth, inspired by a documentary on Africa he’d recently watched. Inspiration is a fickle friend, however, and the rest of the lyrics took half a year to finish.

When not watching documentaries, Paich spent most of his free time playing keyboards for a little band called Toto. The members comprised some of the finest studio musicians in L.A. but critics despised them for their slick musicianship, no matter how catchy or well played their songs might be. After finally working out the lyrics, Paich brought “Africa” to the recording sessions for the group’s fourth album; however, after finishing the track, some of the members disliked it so much that it almost didn’t make it onto the album. Luckily, those members were eventually overruled.

Released as a single in 1982, “Africa” topped the US charts the following year. It has since proceeded to become the band’s signature song, and was recently revitalized when Weezer recorded a cover which scored the band their biggest hit in over a decade.

So take some time to do the things we never had … with Toto.

Note: If I had expanded the question at the top of the post to include the Top 40 then one more song would have made the cut. Everyone remember Shakira’s 2010 hit “Waka Waka (This Time For Africa)”? Well, not me. Because I’d never heard of it before. But it reached #21 in the UK and #38 in the US. So there you go. You wanna win a bar bet with someone? Ask which two songs with continents in the title have charted in the Top 40. They may get one, but they probably won’t get both.